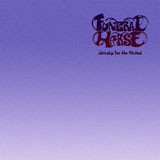 Back again with another release for Artificial Head Records, Texan trio Funeral Horse follow up last years Doom/Punk/Stoner mash up album Sinister Rights Of The Master with another slamming seven tracks of unfiltered noise and heavy duty fuzz rock in the form of Divinity For The Wicked.

Limited to 400 physical copies on heavy weight black vinyl or digital download, the band, comprising of front man/guitarist Paul Bearer, bassist Jason Andy Argonauts and drummer Chris Bassett, further their development by refining and stripping back their sound to a more hardcore influenced version of  heavy blues rock. Here they take their Sabbath core and add a nod to the likes of The Melvins and Harvey Milk as well as an almost psychedelic introspection that gives them yet another dimension.

Opening with the hammer blow of There Shall Be Vultures, the band rip through a high tempo rock and roll barrage that is awash with distorted vocals and up beat rhythms. Funeral Horse positively swagger from the speakers with a twisted take on the blues that instantly gets you swaying as Bearer bellows in a call and response refrain whilst the drums thunder and crash around him and the choppy guitar oscillates between big ringing chords and a low end chug.

Underneath All That Was is a more soulful slower, sombre affair, penned after a colleagues suicide note was discovered several days later on an office notice board having previously gone unnoticed. Crawling at an almost spoken word pace, the vocals shriek and moan over the slower dirge, whilst the mournful guitar work culminates in the highlight of a lazy winding blues heavy solo with synth enhancement behind it.

Instrumental Bit Of Weed serves as a short link to God Of Savages and features picked guitar and tribal tom toms giving the album a retro feel before the beautiful melodic intro picks up on the soothing vibe leaving the listener unprepared for the urgent rush of the main track and the hardcore yelps as the track explodes into life. The blistering solo could have slotted into place on any of the first five Black Sabbath albums as Funeral Horse go for heads down driving fury, whipping up a storm as primitive as the title would suggest.

The epic length Yigaels Wall is another tack that could have come from Volume 4 or Masters of Reality, as the retro feel has hushed spoken vocals at the start before mutating into a weird pace with atmospheric breaks that are almost too long in length, breaking the momentum and keeping you guessing before finally stumbling into a huge ringing Doom wall of sound and collapsing back into a creeping little number. It also features the clearest vocals of the album, yet are unsettling with it’s dynamics, before breaking out into a furious run towards the finish line full of rhythmic hooks and string bends.

The lilting penultimate track, Cities Of The Red Night is a slow burning instrumental that features an inauspicious guitar beginning that sounds a little like parts of Monster Magnet’s re-imagining of their Last Patrol album with gentle fret work, a pitter patter of drums accompanied by pan pipes and ringing bells.

Its soothing atmosphere only lasts so long before Gifts Of Opium And Myrrh smashes in with that Sub-Pop buzz saw guitar that was prevalent on the last album and sets about battering the listener into submission one last time, before bizarrely concluding with bagpipes proving that they may have stripped their sound down but are still, frankly, fucking nuts.

With Divinity For The Wicked, Funeral Horse have channelled their sometimes scattergun approach to song writing into something more focused and pummelling. Here they throw light and shade together for the contrast and make the sonic brick to the temple all the more effective when they do hit you with it.

In some ways more straight forward than previous outings Savage Audio Demon and Sinister Rights Of The Master, Divinity For The Wicked sounds like a band with a more clear direction than before. There is no compromise though, in fact it’s sonically more complex than its predecessors – it just doesn’t hop about like a frog on meth, but comes across more mature and thought out effort than has gone before.

Their best release so far!