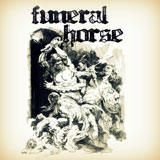 Funeral Horse… I don’t know about you but I fucking love that name. Something I loved even more was that hometown Houston label Artificial Head Records have collaborated with the band to release their debut release on a limited run of cassettes. Yes that’s right you heard me, a cassette in 2013.

When I had just learned to drive, a CD player for my car would have probably cost as much as the thing itself and so I would cruise around listening to everything via a tape deck thinking I was the shit. The car was my freedom and the more I drove the more tapes ended up in it to the point where I would eject them, chuck them on the backseat and grab another until I could rarely carry more than one passenger due to the huge pile in the back and when we used to have summer, Mother Nature would cull this pile by melting a portion into weird shapes through the heat.

Fast forward to present day and due to the stupid manufacturer of my current vehicle decided on building a tape deck into the dashboard so I still have to rock the outdated format… Therefore it was with nostalgic glee I received the awesome blood red tape in the post and as such Savage Audio Demon has become a bit of a favourite of late.

Turning attention to the music itself and Funeral Horse make a full on racket that incorporates metal, blues, doom, punk and other experimental sounds to create a sound to break the speed limit to.

The EP is definitely one of contrasts, beginning with ominous doom tones and droning feedback as tribal Neurosis style drumming tattoos its way into your subconscious before morphing into a towering soundtrack of terror with menacing vocal intonations buried low in the mix.

The Fedayeen, Arabic for ‘one who sacrifices himself’, certainly evokes the feel of ritual with it’s persistent plodding refrains, even when it opens up into the main passage of music and more prominent chanting vocals it still has a psychedelic quasi religious feel. This track thrives on the atmosphere it creates, reverberating and hypnotic; topped off nicely by the melodic eastern style ending with echoing vocals.

The follow up, Crushed Under Shame & Misery comes as a huge surprise when it smashes in as a fast paced punky style track which is almost the antithesis of the first. Comparatively short and furious, it has more in common with the ‘Oi’ movement than it does with experimental drone and doom, it’s stop/start, build and release dynamic is embellished with a break down in the middle and a blistering melodic solo, before coming back at you like the drunk at the bar who won’t accept that last orders has passed.

Just when you have gotten used to that change of pace, the bands eponymous title track reveals itself to be a huge Southern Blues esque number that is full of swagger, stoner rock cool and effect laden vocals which give the impression that this could have been written by three different bands. Not that this should be off putting as the band execute all three styles with a panache that betrays their skill. Funeral Horse is by far the best of the bunch at this point with great chemistry between the band to create the space to let the music breathe and the main groove to the whole thing is fantastic with its laid-back stomp and catchy riffing. The whole thing finishes with a change in pace to the earlier breakneck punk vibe that begins to draw a consistency in styles with the earlier track.

Those with short musical attentions spans will be pleased to see the band then veer off into a Doomy Black Sabbath influenced beginning to Scatter My Ashes Over The Mississippi which starts out at a crawl, before mutating into a noisecore/crust sort of rack focused around a singular crushing nasty riff. Then the track literally stops and heads back off into the earlier chugging punk, but with a delicious melodic vocal turn from Jayson (I guess, what with the band labelling their jobs as as ‘Drugs, Guns and Hookers’!), only this time they somehow manage to work the intro back into the ending. I’m not sure if it is madness or genius, but it does make for compelling listening.

The final two tracks are fairly straight forward by comparison with the proceeding numbers, Wings Ripped Apart is another punk/hardcore style slugfest that comes across like Black Sabbath’s Symptom of the Universe put through a punk blender and recalls High on Fire with it’s influences and Invisible Hand of Revenge is an even faster, old school punk track that has a feel similar to early Discharge with raw vocals and buzzing guitar.

To say that the band have put you through a wide ranging listening work out in a host space of time is an understatement and Savage Audio Demon certainly left me with a different impression of what I was getting into by the end. The band, recently formed in 2013, have come a long way in a short space of time and as a result seem to be still feeling out their style which has resulted in the crazy mash up of Doom, Punk, Hardcore, Noise and Drone that makes up the EP – What must be irritating for longer established bands is that they execute each style they turn their hand to with some aplomb.

Obviously there are things that can be improved with time as Funeral Horse find their feet; the production is a little low-fi or maybe that is a deliberate thing and of course you have to accept them bouncing between styles like a kid with ADHD who has necked a serious amount of old school Sunny D, but when they are in their groove, Savage Audio Demon has a great deal of high spots, it’ll be interesting to see where they go with it. 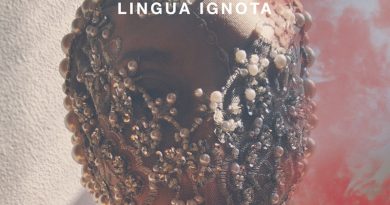 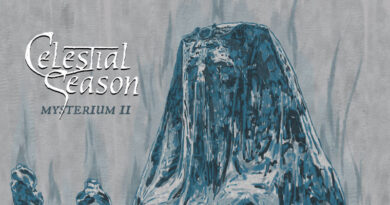