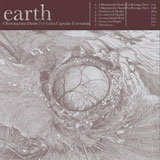 Look, there’s no easy, tactful way to put this, so I’ll just come out with it.

If you don’t own these recordings and you claim to be a fan of Drone, Sludge and/or Doom, then YOU, sir (or madam), are a raging Nigel FALSE and should not, under any circumstances, entry.

Good. Now THAT’S out of the way, we can proceed.

The first three tracks on this release – ‘A Bureaucratic Desire For Revenge’ parts I & II, and ‘Ouroborus Is Broken’ – made up Earth’s very first release, the ‘Extra-Capsular Extraction’ EP, released on Sub Pop records back in 1991 – and the final four tracks – ‘Geometry of Murder’, ‘German Dental Work’, ‘Divine & Bright’ and ‘Dissolution 1’ – were recorded by Earth in 1990, and have since been released in several different guises, most notably as bonus tracks on the 2001 re-issue of Earth’s live ‘Sunn Amps And Smashed Guitars’ CD, and as a 7″ record by the infamous Auto Fact Records label.

The 1990 tracks are considerably more up-tempo than those that came afterwards – although by anyone elses standards they would still be considered pretty darned slow – and feature, wait for it, a drum machine!?!? MADNESS!!!

Boasting the presence of Joe Preston, alongside the infinitely less well-known Dave Harwell, it will come as no surprise to you that the first track of this 1990 session, ‘Geometry Of Murder’ sounds rather a lot like Thrones. A syrupy, tar-thick agglutination of Melvins and Celtic Frost, this track is possibly the most overtly ‘Metal’ track that Earth ever recorded.

The dissonant and martial sounding ‘German Dental Work’ may be known to some of you via the cover version of it that Khanate did a few years back as part of a radio session. The pummelling drum machine is used to great effect here. Now, ‘Divine And Bright’ is Earth’s ‘pop’ number, lasting under three minutes and boasting a melodic yet ragged riff ala Dinosaur Jr, it features an understated vocal performance from some guy called Kurt Cobain and a not-so understated backing vocal by Kelly Canary of Dickless. Final track of this session, ‘Dissolution 1’, reminds me very much of Head of David for some reason, which is no bad thing.

If you haven’t heard the 1990 tracks before – perhaps you’ve been living on a desert island for some time, or maybe you only discovered Earth several minutes ago – they may come as a bit of a surprise to those of you used to the severe dronescapes of ‘Earth 2’ or the haunted country twang of ‘Hex’. The presence of Preston hangs heavy over these four tracks, so once he was out of the equation, it would seem that things moved in a different direction.

I won’t patronise of bore you by going into detail about the opening three tracks, the ‘Extra-Capsular Extraction’ tracks, suffice to say that there is a significant lack of velocity when compared to the earlier session, even the drum machine is set to ‘C-R-A-W-L’, and less in the way of, y’know, riffs and stuff – at most, maybe one or two riffs per song – but what a SOUND! No-one else was really doing this kind of minimalism within a ‘metal’ context back then, hell, even the Melvins had tempo changes and moodswings! Only Earth were THIS stately and glacial. I can still remember the day I heard these tracks and it was such a SHOCK to me. Of course, I bought the EP instantly, but it still took a couple of listens to really take on board. As an initial statement from a new band, it really was quite a hard stance and a difficult pill for some to swallow.

But, of course, you remember all of this don’t you? Right? You HAVE heard this before, haven’t you?

You NIGEL – go burn your Isis records and buy this record RIGHT NOW while there is still hope for your soul. DO IT. DO IT NOW, or forever be a FALSE.