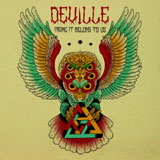 It’s hard to believe it’s been nearly 15 years since the death of Bay Area label Man’s Ruin Records – the underground repository for all things rock; psych, stoner, space, whatever – some of the heaviest hitting bands of the past couple of decades got their start there, handpicked by mastermind/artist/label owner Frank Kozik himself, all waving the slogan flag ‘Empty Pleasures and Desperate Measures since 1994’. The label’s end in 2002, while having absolutely nothing to do directly with Deville’s fourth and latest LP Make It Belong To Us, it symbolized the impending death of an alternative/stoner/hard rock movement Deville’s been diligently trying to rekindle since their start a decade ago.

Here’s the problem. Much like the once underground-now annoyingly far above ground doom scene, there actually is too much of a good thing; stoner rock’s profitability of piecing together solid riffs, groove and melody, with a coating of fuzz to fill in the cracks – some croons ala Lowrider or a lazy drawl ala Scott Hill – the recipe was too attractive and real creativity conceded to a budding generation of imitators. This makes it difficult for a band like Deville to garner the attention they deserve. Luckily, Sweden’s high batting average in the rock column (Greenleaf, Graveyard, and fellow Fuzzorama label mates Truckfighters to drop a few names) buys the Malmo four piece a few extra second looks, ‘cause hey, ‘if they’re rocking from Sweden, then they have to be at least kind of good, if not damn good, right?’ Exactly.

Deville checks all the boxes with this one – great production, bottom end with the right amount of fuzz and finish, a smooth frontman (Andreas Bengtsson, who also covers lead guitars) with enough charisma to actually be memorable – so the sniff test is an obvious pass. But after the strength of tracks like Life In Decay and Chief, in their groove and mosh hybrid aggression, the choice of cruising the open road with your drug du jour, not giving a fuck, or bashing the hell out of something or someone is a sweet one. But to the group’s credit and quite the pleasant surprise (I assume) to virgin listeners is the emphasis on melody and the hook – the band plays like they’ve been perfecting a sound that they truly believe in. Mind On Hold has the right balance of brood, brawn, and cool, with a chorus that’s slick enough to expertly tow the line – Dying to Feel retains the same essential gifts; so when the album burns (in just the right way), it’s hard to let go. That good feeling even makes weaker parts of the album (Lever and Drive almost blend into one seamless hop/skip arpeggio mash) forgivable. But this is a minor criticism of an album that overall hits a lot of great marks. Even tracing back to 2013, Small Stone Records was smart enough to snag a piece of their pie with the Hydra full length, which foreshadowed the strength of what was to come.

So does this mean we’ll wake up tomorrow with crisp Suplecs T-shirts and 7Zuma7’s Deep Inside clutched to our chests – indeed party like it’s 1999? – probably not (although I might because that album’s awesome), but Make It Belong To Us is damn inspiring during these desperate times. And I’m sure old Frank Kozik would be proud that the spirit of his brand of rock lives on. ’Empty Pleasures and Desperate Measures since 2015’…it has a nice ring to it. 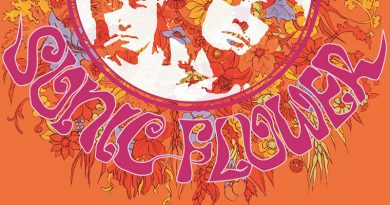