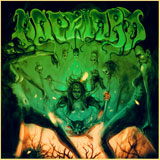 Is there weed? Yes. Are there hulking monster riffs? Yes. Are there samples lifted verbatim from ’80s horror movies? Yes. Is it heavy metal, sped-down and downtuned to all the energy levels of a dead snail? Yes. But you already knew all that right? So what’s new here? Well…

Not a huge amount, it must be said. ‘The Pentagram’ is a riffcycling instrumental opener that begs to be pushed into a third gear and could have been cut shorter for a greater and punchier impact. ‘Ghost Cargo from the Bong’ has arguably the most stoner-metal song title that anyone has ever written ever, ever and I’m still trying to figure out if any sense can be derived from it at all. It’s also the first port that Dopelord weigh anchor in to gather up some Electric Wizard-y vibes; pushing their Jus Oborn-a-like riffage through bouncy patterns that echo the Dorset titans’ debut record. It’s solid, sure, and beefy, plus vocalist Miodek has a galaxy-transcending atmosphere to his voice that gets underneath the river-dredging basslines, but it’s lacking in any real finesse or grubby undercurrents that would see it claim your memory for another listen.

‘Lucifer’s Son’, on the other hand, is the off-the-bat highlight of ‘Magick Rites’. Again showcasing perhaps a little too much Lekkie Wiz foreshadow, it nonetheless explores Miodek’s prayer to the gods of another universe as if blasted from some giant volcano-mounted horn directly into the cosmos. It gathers a true atmosphere to the riffs for the first time and Arek’s lumbering drums satisfy the Satanic themes echoing from its eerie title. By the time ‘Unihorn’ and ‘Magick Holocaust’ hit the speaker cones however, I’m convinced that I’ve heard all these riffs many times somewhere else before. Yes doom is intended to be a static, stagnating brand of dimly-lit heavy metal, but there is neither the mystique nor the dynamism here to see Dopelord tear you away from your Cough, your Candlemass or your Ramesses. Or you bong.

‘Possessed’ does off a glimmer of something more cutting edge, granted, with a choppy stoner riff and a catchy chorus telling us to “give up the madness”, but it then all becomes a little out of place marooned in an ocean of heavier doom. Closer ‘Rise! Undying!’ rocks a cool ethereal traveller’s vibe and Miodek sounds truly in orbit behind the mic, but it just needs more of Klusek’s gritty bass to round out a fatter sound.

With a name like Dopelord, these ex-members of Klingonian Beauty and Solarbabes (no lies, guv!) have aimed high to plant a flag firmly in new, but traditional doom pastures. I can’t help but feel that I’ve been overly critical of their trajectory, but although I can’t directly fault ‘Magick Rites’ for its mission or approach, it has to be said that the overall quality levels and lack of dynamite edge left me a little uninspired by their take on all things murky. Best of luck to the Lords of Dope, and I hope their bong-secured ghost cargo keeps them loaded for the return trip. 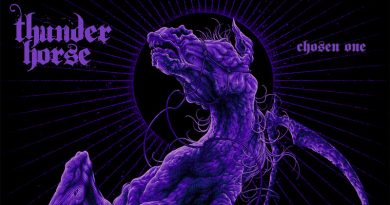