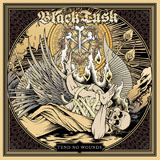 Black Tusk are a band often accused of basking in the reflected glory of bands such as Kylesa and Baroness and whilst this may be true – ‘Tend No Wounds’ is an EP that has far from evolved or progressed musically since the 2011 release of ‘Set the Dial’ – what can be said is that the trio are still firmly flying the flag for the swampy sound of sludge metal whilst the aforementioned Kylesa and Baroness flirt with other sounds and genres. If it ain’t broke don’t fix it and this seems to be a motto that the Savannah sludge lords live and breathe to the extreme.

All six tracks of this opus are stuck in the familiar rut of dense guitar sounds, up tempo semi-shouted vocals and oh-so slightly psychedelic atmosphere. Nothing fancy, nothing complicated, just standardised Black Tusk material that we all know and love. ‘The Weak and the Wise’ and ‘Internal/Eternal’ make suitable listening material for the best of the armchair rockers out there – Black Tusk dance around the idea of party metal, but never quite make contact – lacking the Andrew WK factor, you’ll think about getting up to move about to this, but then decide a good sit down and the occasional appreciative head nod is more in order, but then what’s wrong with that? Nothing about the phrase ‘swamp metal’ suggests a ‘party hard’ attitude. ‘Gators may not move much but they’re packing one hell of a bite and this is certainly true of Jonathan, James and Andrew!

Whilst many may slate Black Tusk for their refusal to abandon ship on their musical style or suggest that the band are becoming stagnant and tired, the guys can be applauded for their determination and consistency. They stick to the same formula, so every new release feels familiar and there’s never a risk of disappointment. By playing it safe they’re ensuring that the core sound of sludge stays pure and is not forgotten about in an age where everyone wants to bend the rules and go that extra mile. They’re old timers and historians of the chug-chug riff.