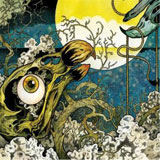 The power-up of the slow warming amp valves and an immediate wail of feedback, then, the sudden drop as the guitars strike an open chord, total fucking bottom-end. This is the very first thing you’ll hear when you put on the new Deadbird record. It has that American sludge sound, similar to peers Sourvein and Rwake. But…after a few bars of slow churning sludge the song drops off, and you’re met with acoustic guitar and semi-clean vocals, it’s not something you’ll be expecting, especially so soon into the first song of the album. It would appear this is sludge but not as we know it my hirsute friends!

This album swings from an atypical sludge drone and crush to more melancholic passages exhibiting a creative thread aiming towards the unique. I would reference Rwake as their kindred spirit in the world of contemporary American metal. It has that same poisonous sound, like being served a glass of drinking water leached with Dioxin and cattle affluent.

The album displays a mix of tempo from the dirty doom epic of opener ‘Into the Clearing’ to the punk styled Black/Thrash intro of ‘Feral Flame’ a song that then winds down and expands into almost freeform improv soloing. It is a fairly expressive mix of style and a warning; there sure isn’t much to make you feel too good within this dark audio claustrophobia, but don’t we dig it most like that?

The album being originally recorded during early Winter 2006 has only seen it’s official release through At A Loss this year, so this is not as new as you might think. The band must be close to gathering new material for another album and I can’t help but wonder where they’ll go with the clean vocal element of their sound. This crossroads could go either way.