A few years ago, after the evolved progression of Vertikal II, the accompanying EP to the jaw dropping album of the same name, it seemed that the hard hitting sextuplet from Umeå, Sweden were contemplating a style revolution. Had they pushed their unrelenting post-metal, progressive approach to music that has seen them winning Grammys, and forging some of the hardest hitting music imaginable beyond the point of fatigue? Of course in inimitable style, they expanded their sound collaborating with US Singer Julie Christmas on the sensation Mariner and returned in 2019 with one of their career best albums, A Dawn To Fear.

Amidst this they took time to create Red Creek, their own label to help them curate their art and dictate their own destiny (as if that had ever seemed in doubt). For their debut release they have created The Raging River, an EP that to be described as ‘stop gap’ would do them a huge disservice,  but draws together elements that have been held from release for years, and material that helps draw a line under the last album cycle, clearing the slate to start the future afresh.

Three Bridges starts inauspiciously with a creeping industrial shuffling drums and light guitar work, before exploding into Cult Of Luna‘s trademark rough, weighty delivery. This makes the listening experience easy at first, before matching the abrasive nature of their music by adding the layers of texture that make the band so special. The juxtaposition of the almost dancing melodies breathe life into this track, making it increasingly accessible allowing you to drift into moments of ecstasy, despite the roaring, jagged vocals.

Three Bridges has many elements of their career, from the guttural intonations of The Beyond, through the heavily electric moments that were ushered in by Vertikal. It feels like the watershed moment they talked of when they released the 2013 EP, both paying homage to the journey from which they’ve come and driving to reach out to an unknown future.

The dense walls of sounds echo and ring, whilst giant waves crash on the tender interludes…

What I Leave Behind, possibly a symbolic name, ditches the slow burning subtlety of the first track for a decidedly more hammer blow approach with stop start dynamics and grinding bass elements, that not even the increasing electronic influence can temper. For all their progressive and expansive sound, Cult Of Luna are often at their sharpest when they’re at their most direct. Whilst still remaining complex, the music is relatively more straightforward with the call and response between the syth and live musicians.

Inside Of A Dream may have its roots from a songwriting session fifteen  years ago when it was dubbed Lanegan Song, in homage to the style of writing defined by the former Screaming Trees frontman, but they also pull off the coop of actually getting man himself to lend his voice to this tender track. As expected the vocals are sublime and the music often takes a backseat to that rich tone, to the point where it could realistically belong on any one of Mark Lanegan’s own albums. In an EP that is to showcase Cult Of Luna’s trademarks, Inside Of A Dream is a tender eye of the storm respite.

The towering eight minutes of I Remember quickly crushes the peace with huge ringing riffs and pummelling drums that signal it’s pretty much business as usual. The dense walls of sounds echo and ring, whilst giant waves crash on the tender interludes seeming to make all the parts more powerful and potent in strength. The closing of Wave After Wave is a perfect summary of all the elements that The Raging River contains.

This EP is the perfect snapshot of Cult Of Luna 2021. The five tracker may have been presented to kick star their Red Creek era, but coupled with the multitudes of delicious limited coloured vinyl options and lavish packaging, makes this a premium release (in truth the review was delayed as I waited in vain for my pre-order to arrive, but thanks to the wonders of leaving the European market, it’s typically been delayed in the post) but it feels like an vital signpost to future. 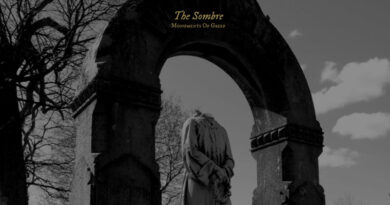 Review: The Sombre ‘Monuments Of Grief’