Toronto, Ontario’s Lammping are a band that have been on my radar for a year or so. In fact, their 2021 record Flashjacks has been on my ‘list’ and in my queue as a ‘need to listen to’ as I received the opportunity to review their latest EP Stars We Lost, so I took that as the cosmos telling me it’s time to check these guys out. I’ve heard a lot of positive things about them, as well as some not-so-positive things, including right here on The Sleeping Shaman.

So, this right here is a perfect example of music being unique to each listener, so I chose to absorb Stars We Lost with that mindset. As well, I didn’t listen to Flashjacks first. I went in with a totally clean slate sonically, knowing that some people seem to really enjoy these guys, others not so much. I heard these guys were stoner/psych, with some extra fuzz, and, uniquely in this genre, some hip-hop influences sprinkled about, which frankly makes me nervous.

I’ve been known to listen to a fair amount of very specific hip-hop groups. I cannot stand commercial, corporate ‘rap’ of any kind, and historically, mixing any hip hop/rap with rock doesn’t go over well. Like at all. I can point to a small handful of examples, that are good-to-not-sucking, but basically that’s the combo that birthed the abomination known as ‘nu-metal’ so I am very, very weary when hearing of hip hop influences in rock & roll. For me, I’ll take one or the other.

So, all that being said, are Lammping, the band’s name allegedly a nod to Flavor-Flav and his cut Cold Lampin’ with Flavor off the immortal It Takes a Nation of Millions to Hold Us Back, able to meld their hip hop influence with some fuzzy stoner rock and make it work? Right off the bat, Stars We Lost opening cut Everlasting Moor conjures up some early 90s, lo-fi, alt-rock mixed with a driving, Keep Your Cool-era Brant Bjorkbeat. Some trippy, surfy guitar makes an appearance, and it took repeated spins to finally nail what exactly this reminds of 90s UK alt-post-punk one-hit-wonders Elastica. Same vibe and singer, founder and multi-instrumentalist Mikhail Galkin’s vocal stylings drew comparisons to my ears.

this EP sits right along the Elastica boulevard, and the Luscious Jackson avenue, with a pinch of funky Brant Bjork-ish fuzz thrown in…

This is definitely not what I would consider stoner rock in any way, by the definition of the genre. Yes, there’s some fuzzy guitar, but that’s it. Never Phoenix reminds me of a Beastie Boys, Grand Royal Recordsera trip-hop band, total lo-fi 90s. It’s a cool track reminding me also ofMellow Gold-era Beck. It’s as catchy as it is annoying frankly.

21 Interlude is a cool instrumental, while Beyond The Veil harkens back to yet another 90s artist Lucious Jackson, a Grand Royalband of that era. It’s got a great, catchy melody, a pretty cool, distorted beat, and some spacey guitar layered over it. Golem Of Garbage Hill revives the aforementioned Elastica vibe. There’s some mild fuzz going on, but Lammping continue their sort of ode-to-early-90s alt-hip hop.

I really wasn’t sure what to make of Lammping going in, and even though this release is an EP, I spun it multiple times in an effort to absorb it enough to articulate what I’m hearing, and what it reminds me of at least somewhat coherently.  Lammping succeed, not so much in mixing hip-hop with stoner rock type guitars, at least not to my ears, and not on this release. What they do succeed in is conjuring up a total ode to early 90s lo-fi alt-hip hop bands. I also hear some Sonic Youth, but this EP sits right along the Elastica boulevard, and the Luscious Jackson avenue, with a pinch of funky Brant Bjork-ish fuzz thrown in for good measure.

Stars We Lost is a good EP for sure, I can see what the hype with Lammping is about, but it is definitely neither stoner rock, nor psychedelic rock, as they’ve also been described as. I will say they’re unique in this scene and my curiosity is quipped enough that I’m going to dive into Flashjacks now. 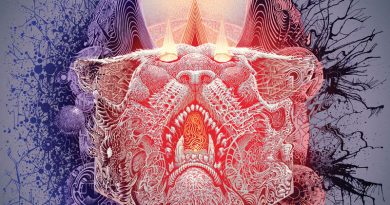