In the genre we call desert rock, outside of Kyuss, and the bands and artists that splintered from them, it seems that so many ‘desert rock’ bands don’t really play in a desert. Kyuss proffered such an isolated, distinctive sound, tonally, as well as conjuring up a unique sense of space, that the hordes of bands left in their wake, did their best to emulate that vibe, even if they’re geographically nowhere near a desert. I think of some of the early Swedish bands like Dozer and Lowrider. Both definitely were able to execute (pretty flawlessly) a European version of ‘desert rock’ that replicated Kyuss’s tone and vibe, if shot through a Scandinavian lens whilst being almost as far away from a desert as one can get.

What’s the point to all this? Well, the debut LP, Ephemeral from Albuquerque, New Mexico’s Blue Heron checks the boxes that one looks for in this genre. First, vocalist Jadd Shickler has been around this scene since its very inception. As co-founder of MeteorCity Records back in the mid-to-late-90s, Shickler played a pretty huge role in getting this music out to the masses, having released some of the earliest works by Dozer, Lowrider, Nebula, The Atomic Bitchwax, Unida, etc etc as MeteorCity was one of the most influential record labels at the very genesis of stoner and desert rock, so to say that Shickler knows a thing or two about this music would be an understatement.

As well, he now operates Blues Funeral Recordings, who notably released Lowrider’s next-level comeback Refractions in 2020, that record being one of the very best of the last decade. As well, Blue Heron are actually from THE DESERT. Albuquerque(full disclosure: I’m an Albuquerque resident, I was born here, and I’ve lived here most of my life) is as much of a desert city as there is in this country. You see, New Mexico is specifically the high desert, giving the state a very unique geography. So, Shickler’s history with this music, as well as his location, mean that Blue Heron can most certainly be considered desert rock.

Shickler, formerly of Spiritu, his underrated, early 2000’s band, has assembled some serious musicians with his latest project Blue Heron. They released the first single from Ephemeral in the form of the Black Blood Of The Earth/A Sunken Place EP back in December of 2021 which showed a ton of promise, and I hoped Ephemeral would continue the momentum.

If one wants ‘desert rock’ then Blue Heron are most certainly the real deal, both sonically and geographically…

Ephemeral is a huge, spacious, epic, moody record. Opener Futurola displays this immediately as guitarist Mike Chavez (who was also in Spiritu with Shickler) produces a fuzzy, intro- riff, that builds into a cascade of rolling riffage that’s deftly propelled by but drummer Ricardo Sanchez, whose presence is all over Ephemeral. Next cut, the immense Sayonara is where Blue Heron blow open a portal to space. To say this track is massive would be a minimization of its heft. Chavez’s riffs are colossal, Sanchez’s heavy hitting, and killer rolls and fills keep Sayonara flowing along, while bassist Steve Schmidlapp produces a thick, fluid sound, as he rumbles in between Chavez and Sanchez effortlessly.

Chavez is able to conjure a real sense of space, that, as a New Mexico resident, I can certainly relate to. Sanchez unleashes all sorts of rolls, and fills during this mellow breakdown, as the three musicians really lock in. Sayonara then rumbles back to life as Chavez drops a driving riff as the band rides to Sayonara’s conclusion. Sayonara,for me, is the centerpiece of Ephemeral and its best track on their debut long-player.

Elsewhere, first single and video Push The Sky show Blue Heron’s ability to mix some melody with their heft as Shickler shows his range, crooning in places, before unleashing his aforementioned, Sixty Watt Shaman-esque bark. But once again this rhythm section kills it. Sanchez sounds fantastic, and Schmidlapp is the thick syrup holding it all together.

Infiniton Field is an instrumental interlude, again showing that Chavez is able to distill the vastness of New Mexico into his guitar, while Schmidlapp anchors The Buck with a real command of his bass, controlling the flow of the song. The previously reviewed Black Blood Of The Earth turned out to be the most aggressive track on the record, and Where One Went Together is a beautiful little acoustic interlude before the album closes with Salvage. The track starts with a bit of a slow-build before unfolding into a mid-tempo riff monster, allowing Blue Heron to, ahem, stretch their wings one last time on the way out.

Ephemeral is a big, long, epic record, that succeeds in conjuring up a sense of space, and vastness that’s not easily achieved, especially with bands making their debut record. But Blue Heron is a band of veterans, boasting a singer who knows this genre inside-out. However, Ephemeral isn’t necessarily the most original record, as these sounds are known, well-worn, and familiar. As well, some of Shickler’s subject matter has been visited many, many times in this genre, however, these are minor grumbles, as Ephemeral is overall a killer album conceived by four outstanding musicians. If one wants ‘desert rock’ then Blue Heron are most certainly the real deal, both sonically and geographically. 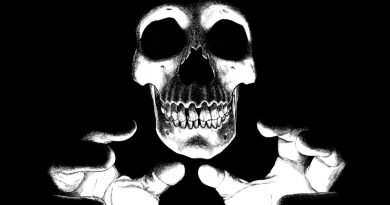