I’m sold. Jon Imbernon is half this album well then here’s my debit card number and keep the tab open. He has become an inspiration in my own playing, and he is always kind enough to answer my questions long after the time I interviewed him as part of our In Search of Tone series. In fact, I probably have enough content to piece together two to three more interviews, but then you would have to witness my stupid questions again.

This project is vastly different than Gangrened and probably more coincides with the ‘new’ second half of Gangrened, Olli Wikstrom, and his ambient drone band Qstaw. Imbernon and Mikel Vega have created an ambient free form album entitled Eolian Dawn consisting of six slow ambient improvisations, similar to Qstaw but lacking the drums. It’s not for everybody but if you allow it, you can easily get lost in this. A quick warning though, if played on repeat, the listener may not be seen for days, let a friend or loved one know where you are before you attempt it.

Eolian Empire begins the six-track album with a unique take on the guitar with seemingly random notes mixed in with a pick scratch drenched heavily in reverb and delay. The eerie sounds fade in and out until around the five-minute mark where it begins to intensify before a calming conclusion.

Awarstee continues the same foundation with improvised notes meticulously played to generate feeling. The harrowing darkness creates an uncomfortable setting without being resolved right away. It’s minimalist in nature and continues to build on each sound creating fuller soundscapes as the track progresses. Near the end, the tremolo like effect speeds up and reminds me much of a darker On The Run by none other than Pink Floyd.

The beginning of The World Is Run By Mass Persuasion can definitely be used in a horror movie. The fading in and out noises would be perfect for a scene that flicks between light and dark, allowing the audience to piece together what is happening on screen. This track is riddled with eerie vibes that could make the hairs of cinema goers stand on end while watching. Very cool effects.

Nossomar is my favorite track on the album. The single note intro fades to nothing for some time and then soothing strummed guitars with a deep droning background swell in the air. Imbernon and Vega blend their sounds seamlessly and I cannot differentiate the two. Occasionally, I feel like I hear a vibe akin to the Gangrened track Harrbåda and I think ‘That’s Jon!’ but it’s amazing how they stretch the use of a guitar beyond its limits creating otherworldly sounds.

The first track I heard from this project was Idyllic and it was astounding. I’m amazed by how a few notes can capture your attention. I hang on to every note, like a word in a sentence, needing to know what comes next. This ten-minute track goes by in a snap of a finger and it’s the reason I said don’t listen to this album on repeat because time will escape you.

Social Media Hacked Your Mind But That’s A Difficult Thing For You To Comprehend concludes the album and by the time I wrote this sentence, the track is over. It’s short at one and a half minutes of loud continuous distorted noise that abruptly ends as fast as it starts. It’s a complete 180 degree turn from what the rest of the album holds, and the sharp contrast from the other music makes an interesting but fitting end to this creative album.

I think what truly draws me to Eolian Dawn is that when I play guitar, I follow a similar style. Now I’m nowhere near as good, or as experimental, as these two talented individuals, but with not in a band myself, I tend to plug in my guitar and make noise. I like to try out different settings and play droning music that stops time. This album is what I strive to do and has inspired me yet again to push my limits. 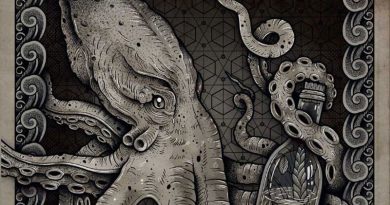