Every once in a while a band comes along, with such intensity, and with an ‘all guns blazing’ ferociousness about them, that its impossible to ignore their existence. Admittedly, until you find them, they are an unknown entity, waiting to be discovered, but once you cross paths, you are forever bonded.

BlackLab are one of those bands, and today I am going to try and do justice to their new release, In A Bizarre Dream, by trying to eloquently review it, for your benefit. You can thank me later…

For those in the know, and especially for us at The Sleeping Shaman, who have already been following the Japanese two piece for a couple of years now, and royally praising to the heavens, this review will do nothing except further solidify what’s already known, and that’s that this duo are absolutely phenomenal.

Part stoner doom, with a smidge of hardcore shoegaze, and a healthy dose of riot girrl grunge thrown in for good measure, the outpouring sonically is truly beastly. What Yuko and Chia do is take the rawest ingredients from each area, and throw them together into a mix that would have the devil himself running for the hills.

Gritty and abrasive, yet tinged with moments of trippy ambient reflection, the end result is something that requires volume up high, and nonsense at a minimum. There is a real sense of joy and fun too, the sound of artists truly enjoying creating something which is so visceral, yet equally structured, and methodical, really does strike a chord with me.

In A Bizarre Dream is their third full length, and over the course of the ten tracks, you need to strap yourself in and enjoy the ride as it builds on previous releases, and leaves listeners wanting to go back, and explore their back catalogue. Uncompromising is probably the best word I can think of, but if you want a more in-depth overview, then read on….

BlackLab make a noise so ridiculously dirty and heavy, that if it isn’t blowing your speakers, you’re doing it wrong…

To the uninitiated, BlackLab are not dissimilar to a few other bands, but by the same token, aren’t actually like anyone else either. If, for instance, you were to take the bolshiness and riot girrl elements of Hole, when Doll Parts was out and popular, and threw in some gritty Sabbath like riffage, then I believe you would be in the right arena for sure. Not as transparent as Courtney Love, and nowhere near as beardy as Black Sabbath, BlackLab make a noise so ridiculously dirty and heavy, that if it isn’t blowing your speakers, you’re doing it wrong.

Take, for instance, tracks such as Monochrome Rainbow, and album opener Cold Rain, where the heavy, fuzzy DIY natured saturation rides through, and you can honestly feel like you are crawling through syrup. The track Abyss Woods especially reminds me of one of my favourite bands, Crystal Spiders. The mix of dirty, fuzzy doom drudge, coupled with a clear vocal, has me reaching out to pull the bands into line with each other.

Evil 2 shows another side to the band, where a super cool Clutch like vibe hits like a sledgehammer. At times the vocal is hypnotic, and mix to that a slower, chunky groove, and it strikes at early Clutch releases for sure. One of the biggest curveballs on the album is track six, Crows, Sparrows, And Cats. This track utilises the vocal talents of Stereolab’s Laetitia Sadier, and hits with a cool, more user-friendly approach. Think stoner Britpop indie, and you wouldn’t be too far away.

On an album filled with so many highlights, it’s hard to point any specific moments. If forced into submission, I would have to say that if you wanted to catch an idea, then for me, Dark Clouds, Evil 2, and Collapse would be a good shout. Each of these captures’ elements of versatility within the band, and keep things adventurous, without straying from any path in particular.

Overall though, if you want something to annoy your neighbours, boost your street cred on obscure music, and have a bloody great time with, then this album is a must. It hits all the right notes, covers all the bases, and is truly monumental in scale.

One thing I’ve learned over the years, a parting pearl of wisdom if you will, is to never write off something that sounds simple because the best ideas always are. If it ain’t broke, don’t fix it, that’s the saying, right? Instead, take it, embellish the fuck out of it, and make it completely your own. That’s what this is, 100% BlackLab, and 100% incredible. 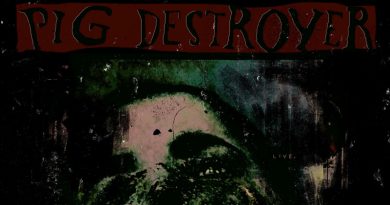