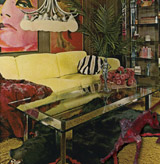 Seattle’s Brokaw may be more indebted to the sounds of hardcore punk, funk and 1990’s alternative rock than many of the bands that feature here on the pages of the Sleeping Shaman but that doesn’t mean that they ain’t got riffs. In fact the eight tracks on their Good to Die debut, Interiors, are tightly wound, nuanced and jam-packed with angular, punch-you-in-the-face riffs and dripping with attitude. And the album clocks in at a refreshing 27 minutes, about the same length as one of Earth’s songs or the start of a Mars Volta jam…

Opening track “Ambulance Red”, like many of the songs that follow it, combines a punchy bass line and manic layers of wailing guitars, sounding something like a cross between The Jesus Lizard and Primus. “No Morphine Doctor” brings a jerky, awkward rhythm and time-signature into the mix making you want to dance along and bang your head like you’re being tazered by some bastard cop. Elsewhere the funk and infectious guitar licks of “Politicians By the Pool” bring to mind, strangely, Blood Sugar Sex Magik-era Red Hot Chili Peppers. Likewise, final song “You Didn’t Invent Sex” has the magical combination of a great riff and a catchy chorus. As an album closer it sums up Brokaw’s strong points beautifully and is full of sleazy energy like early Jane’s Addiction.

On the other hand “Time Ain’t Now” and “The Slide” are both guilty of overplaying riffs and ideas that could have been good hooks but that are not necessarily strong enough to form the basis of songs. It’s a minor quibble for such a short album but by the same token it also means that precious time is being wasted. Saying that, the latter has some great Hendrix-esque licks which are amble payment for all of the repetition. Just about.

Sonically the production is harsh and treble-heavy in that awesome Steve Albini fashion, which  makes the 90’s influence all the more apparent to my earholes. But the off-kilter subject matter, music and vocal delivery of singer Mike Henderson brings to mind Matt Korvette and the rest of the Pissed Jeans gang along with the likes of Rodan and Heavy Vegetable but with more of a hardcore backbone.

Doubtless many people will have been drawn into Brokaw’s freak-punk racket as I was by the mere mention of bassist Stuart Dahlquist, sometime Sunn O))) and Goatsnake contributor. Indeed one of the most telling moments on the album comes towards the end of “Terms of War” when the band drop down into a distinctly doom-sounding segment and on first listen it was impossible not to think that it must have been Dahlquist’s doing. But as it turns out Brokaw carve out a sound that is uniquely their own and have no use for riding coattails. Brokaw are kind of like a hyperactive pup and Interiors is what happens when you let it off the lead. This is half an hour and change of crazy, bouncy fun for fans of early 90’s alternative rock, so call me a poodle and throw me a Brokaw treat. Woof! 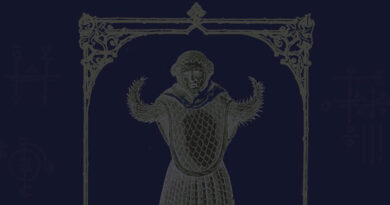