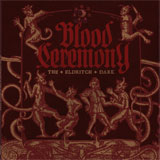 If one movement has burst out of the underground over the past couple of years it’s the appropriately penned ‘occult rock.’ With catchy lyrics, attractive front women and hummable vocals, it’s unsurprising that journalists are desperate to unite these bands and draw in youngsters from far and wide into the new art of worshipping the old.

Of course, with most these bands there’s much more than meets the eye such as The Devil’s Blood’s fantastic adaptation of classic rock melodies and Ghost’s well thought out plan to reach everyone from modern metal slammers to mullet sporting dads.

One band getting in the limelight that have been on the poisoned tongues of many ‘occult rock’ fans for the past few years are Toronto’s Blood Ceremony. Having an almost perfect checklist of what is needed in this niche, including being signed to the largely consistent Rise Above Records, Blood Ceremony have made a name for themselves as a band that can deliver with a genuine feel that you are travelling back in time.

So with album number three ‘The Eldritch Dark’ has everything to prove with a band’s third album normally being a ‘make or break’ moment.

The first thing that hits you on this opus is the obviously Jethro Tull like flute which starts on ‘Witchwood’ and makes frequent appearances. The instrument adds an important layer to Blood Ceremony, making them sound a bit different to the rest of the pack and more importantly adding a very underappreciated instrument to the mix.

Also handling vocals, Alia O’Brien is clearly the main focus and selling point of Blood Ceremony. Her vocals on ‘The Eldritch Dark’ are very soft and atmospheric and give songs such as ‘Drawing Down the Moon’ that folky, no need to look past the 70s feel the band are evidently after.

Although it’s obvious that Blood Ceremony aren’t trying to create something that’s unique, the lack of progression can at times become tiresome and it can’t be helped but noticed that this is pretty much the same formula as album number one. This may be the entire point, with only a very choice amount of influences and sounds suitable, but by the middle of the album stagnation is at least slightly noticeable.

This is most blatant in ‘Lord Summerisle’ which despite having a great name is musically too similar to bands like Jefferson Airplane. Where at times this is charming, on some occasions the level of tribute used is uncomfortable and cravings for something a bit bolder kick in.

Completely appropriate to these songs is the perfectly thin production which, again, is reminiscent of the great bands that shaped rock. This rounds off an effort that really is the full package if you’re looking for a band that sums up what people are calling ‘occult rock.’

‘The Eldritch Dark’ although not an immortal piece of work is a fun and entertaining enough album that will make you want to revisit your Deep Purple records and shun anything modern.