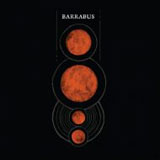 Gather round, children, and I’ll tell you a tale. The year was 2007, the weather was British and there were fell voices in the air. SikTh, those technical metal titans, were saying goodbye after just two excellent albums, and I realised that I had to see them live before they left for good. I hopped on the train to fair Londinium not knowing what to expect. What I did not expect was the cacophony that greeted me when I got to the gig. I had arrived just in time to hear Paul Catten, vocalist of sonic pioneers Barrabus (among many other projects) declare to the audience “I once fucked an amputee with no arms or legs!” before launching into an early version of Pre-Op. It blew my tiny, teenage mind.

So it’s no surprise that I’m pretty bloody excited that after ten years and pretty much total radio silence, Barrabus have finally released their first official full-length album. The eponymous Barrabus, builds on several tracks that have been around in demo form for a few years, and adds a few new ones. It’s not easy to classify their sound: there’s some classic rock, some stoner-ish metal, some punk, some industrial tinges, topped off with Catten‘s apparent love for electronic weirdness. An eclectic mix of sounds that make for a short but cohesive album with a lot of originality. Barrabus know what they do well and they stick to their guns.

From the off it’s clear that Barrabus love a good riff. The album packs its 29 minutes with catchy guitarwork that hits hard. If you’re listening to this one on the way to work you’ll be locked in a constant struggle to keep your head stationary. Opener TV Contestant illustrates Barrabus‘ approach to song-writing perfectly: lure the listener in with a lovely solid groove, then completely unnerve them with a manic chorus, complete with relentless snare smashing and Paul Catten screaming like a nutter.

Though this is a strong and welcome release, Barrabus‘s short running time is a bit of a blessing in disguise. There are hints of experimentalism and innovation in places like the smooth, bluesy opening of Behind Closed Doors and In League With Vader‘s piercing synths, but they never take a prominent place in the song. And they don’t come close to Catten‘s more experimental work under Stuntcock, or his 2011 self-titled debut. They are like details that build on a structure common to almost every song here. If the album was any longer it would be repetitive. But, hey, it’s a structure that works, and the band are great at writing catchy tunes that go nicely with Catten‘s vocal style and use of lyricism.

It’s great to see that Barrabus is a continuation of what the band started all those years ago: great hooks coupled with the brilliantly bizarre range of vocals I so fondly remember. The comparison might not be immediately obvious, but there’s something to Barrabus that’s reminiscent of the first Nails album that blew up: it’s powerful, it’s entertaining and it doesn’t overstay it’s welcome. The only downside is that I’m going to have these riffs stuck in my head for weeks.