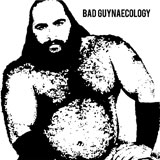 Labels are convenient. They help us recover lost items, take the right medication and stop that twat Gary from finance eating our defenceless lunch. In the world of music, and metal in particular, they act as a convenient handle on whether we’ll dig a bands sound or not.

Some bands resist labels with a Teflon like ease. Londoners Bad Guys shed labels not because they’re something you haven’t heard before, but because they grab all the great stuff you have, and pummel it into it’s simplest, purest form.

And while they are funny, running in a vein of bands who don’t take themselves too seriously like Gurt or Weedeater, their impressive musicianship and sheer variety elevate them above mere pastiche or schlock value. Reaper carries infectious rock vibes that are like some kind of guitar based STD, a rampant stormer that is surprisingly uplifting, with the line “Love is everything/The Only thing worth anything” belted out with gravelly conviction.

They mix things up again and again. Motorhome is a thrashy, clattering wall of noise that is about exactly what you think it’s about. World Murderer is a doomier affair, echoing the likes of The Sword in its dynamic shifts and guitar wizardry. The pinnacle of the record, though, is closer No Tomorrow, a towering edifice of mighty length and girth, a showcase of what these Guys are all about. A brooding, fuzztastic bassline, galloping toms and shifting riffs, dizzying guitar work and vox ranging from squawks and growls to howls and croons. It’s a roiling mass, a monstrous showcase.

None of this brings us any closer to assigning these Bad Guys a label, though. There’s a lot going on here, muscular metal, rollocking hard rock and fuzzy funnies. The only label you need take any notice of in regards to Bad Guynaecology is that it is good. Real fucking good.