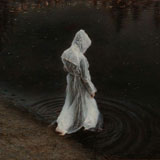 Gothenburg, Sweden’s Monolord slammed downtown into Doomtown last year with their 2014 debut Empress Rising. The trio, comprising ex-Marulk and Rotten Sound members in the form of Thomas V Jäger (Guitars, Vocals and great surname), Mika Häkki (Bass and a solid 8/10 name-a-like for Mika Häkkinen) and Esben Willems (Drums, Mixing & Mastering, can be found with or without the Witch), built a name for themselves quickly with a mammoth and instantly brutal sound that blended the bleak expanses of Sleep’s Dopesmoker with the churning dirges of Toner Low and Ufomammut. With Empress Rising capping many “Doomier than A Really Doomy Thing” lists last year, the treble-denimed threesome have now rapidly re-grouped to crank out a sophomore effort Vænir (the title coming from the ancient name of Sweden’s largest lake) that’s already got many pissing in their drainpipes and Vans with excitement. Hence, it’s with a twinge of frustration that I’ve got to admit that even after repeated listens of their tombstoning riffery, Vænir simply doesn’t sink my battleship.

Let’s start off with the positives. Vænir does sound massive; a swirling mass of hypnotic, pounding riffs, rumbling bass cues and ominous lumps of drummed devastation. Plus there’s nothing wrong with the targets and destinations that Monolord set out to reach on their second long-player in just over twelve months. The scene is set right from the off with a wall of ear-dampening fuzz, skull-rattling rhythms and a familiar, yet unsettling atmosphere throughout the likes of opening salvos Cursing The One and We Will Burn. Indeed, there’s few who could deny that this entire release is as heavy and blatant as Matt Pike’s abuse of sweet, innocent t-shirts. There’s a grittier, more un-nerving vibe than the smooth, sickly blood flow of Empress Rising, particularly on the languishing torment of Died A Million Times and the eerie sanity-dissection that is the sixteen-minute title-track. Rather than plain old bone-crushing throughout, there are a few forms of notable texture in there too, especially on the acoustic strum of interlude track The Cosmic Silence, which nods towards Sabbath’s Spirit Caravan or Kyuss’ Phototropic,and the haunted-house crash-bangs of Nuclear Death.

But unfortunately, other than the odd few tone-shifting bowel movements or subtle melodies hinted through the mire of distorted guitars, my overall feeling of Vænir is simply one of boredom and inconsequence. Monolord are not a band so heavy that they’re in a position to put to one side everything else that should make for a great doom album (a la Sunn O))), Cult of Occult or Monarch!, in my opinion). Cursing The One sets out on a noble path and gets interesting briefly in the middle with Jäger’s swimming underwater vocals, but that huge central riff fails to be expanded on and ultimately just dulls the listener rather than flattening them. We Will Burn hints at a greater sense of dynamism, but all I can think throughout listening to this is how much they sound like Acid King, Indian, early Ufomammut or Windhand, and consequently that I just want to switch Monolord off and stick those bands on instead. That said, the final slug-out riff is pretty cool.

Nuclear Death again fails to transcend anywhere beyond the obvious to me and becomes a bit of a stale filler track. Died A Million Times is the one redeeming feature in the middle of the order, crashing through layers of rock-encrusted, crude sludge, coupled with a greater sense of melody to the vocals and a sweet solo on the 8.30 mark. The hulking title-track closer Vænir seems to take half a lifetime to get going and again is mostly a meandering, purposeless crawl through the outer beyond. Less than halfway through its sixteen-minute duration, it feels lifeless and static to me, reaching out to chords and snail-paced rhythms that have been created, re-created and buried many times over by multiple other bands. The recovery is slow and incomplete over the remaining six or so minutes and after a couple of runs through, I saw no reason to head back to the start again.

With some records, I get a poignant “it’s not you, it’s me” feeling and with Vænir it feels a bit like there’s a party going on next door that I’m not invited to and wouldn’t necessarily rave me senseless anyway. It’s a heavy as hell piece of music, and Monolord’s overall tone remains one of the harshest I’ve heard yet in 2015. But for me, Vænir fails to surpass Empress Rising or many of the other superb doom albums released worldwide in the last twelve months. Perhaps live it would be a different experience, but for now I’ll say that this lake is just too murky to really float my boat.