Strange things are afoot in Sweden. There seems to be some kind of time paradox, or a wrinkle in time, but either way, there seems to be a fluctuation in bands emerging who seem to have taken that seventies style and pulled it firmly in to the twenty first century. It would appear that it’s a full force attack of all guitars blazing and sleazy seventies hard rock. Fully embracing the dirtiest parts of the by gone era, its filling our ears with powerhouse chord attacks, straight to the dome.

Acid’s Trip are the latest export from the land of the Swedes who have embraced this spirit, and are set to release their debut opus, ‘Strings of Soul’ in the coming days. What you can expect is a trip back in time, courtesy of Acid, and her ‘trip’. The songstress has an ensemble of musicians at her side, and you can literally smell the denim and leather oozing out of the speakers.

High speed rock and roll is the name of the game, taking no prisoners in the process. It’s the musical equivalent of filling you full of cheap liquor and strapping you to the rear of a super beast motorcycle, before dragging you off into the night, fearless of how things will end up by the morning.

Acid’s Trip are by no means the first band to emerge from Sweden who have completely embraced the whole retro sound, if you look to the likes of fellow country folk Blues Pills and Electric Hydra, you will see the same ideals. It has the whole feel of that bygone seventies’ era, but with an extra twenty first century edge thrown in for good measure.

If you think early Heart, meets The Donnas, meets The Runaways, then I think you wouldn’t be far off the sound and vibe that Acid’s Trip convey. Its fast and sleazy, and throughout the course of the twelve tracks, this feeling really gets hammered home.

Tracks like Strings Of Soul, and Just A Man really play with those trippy seventies hard rock sounds. The sultry female vocal writhes provocatively over the combination of chunky guitars and flamboyant drumming. It’s a cliché, but uber cool. It feels like listening to an old album from back in the day, but it also feels fresh and new.

Acid’s Trip are here to inject some good times, and nostalgia into the hard rock scene…

Songs such as The Kiss Riff leave very little doubt as to where this fits in to the hard rock timeline. With its sleazy Kiss stylings, and anthemic lyrical lines such as ‘you can’t beat rock and roll’, this is good time hard rock, at its best. Yes, like I mentioned it’s a cliché, but its infectiously fun at the same time. Its emulating without ridiculing and feels completely genuine.

Just as a little reminder that this is a twenty first century album, there are clues, such as the aptly named No More Fucks, one of the highlights of the whole album for me personally. The use of naughty words in the title serves as a reminder that we live in a time where this is far more acceptable. It would have caused absolute uproar in the seventies, but now it’s not out of place at all. Its also a pacey little tune, and I’m sure will be an instant hit with fans. More breakneck in style, it’s as hard as it is obnoxious. Faster, Chopper, Boogie also captures this spirit, and with its good time retro heavy rock vibe, this is where I draw comparison with The Donnas.

If you’re new to the band, then High Time will be the go-to track as it captures all of the best elements of the band, in an easily listenable tune, that really embraces everything Acid’s Trip have to offer. Get It Right throws in another angle, with its AC/DC vibes opening out into a more southern seventies vibe, that Lynyrd Skynyrd themselves would be proud of. With the mix of male and female vocal, its denser with a real feel-good vibe to it all.

If Only (I Were The Only) is a raucous romp throughout, a high octane few minutes, that deserves to be played LOUD!! Hell Or High Water finishes the opus, and what a finish it is. An all guns blazing romp, complete with a full-on group vocal finish. Anthemic, and humbling at the same time.

Acid’s Trip are here to inject some good times, and nostalgia into the hard rock scene. It may not be to everyone’s taste, but it’s such a competently played album there’s no denying just how fantastical it is. If retro seventies good time rock is your bag, then this will be the one for you. It’s time to saddle up, jump on, and ride off into the sunset with the band known as Acid’s Trip. 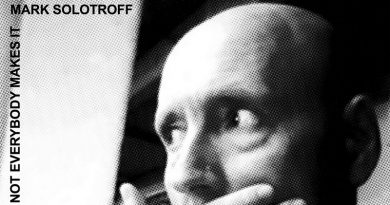 Review: Mark Solotroff ‘Not Everybody Makes It’