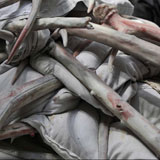 Combining three of the best things to have ever come out of Belgium – post-metal aficionados Amenra, indie-pop/rock duo Madensuyu and artist Berlinde de Bruyckere, who provided the stunning artwork for this 10” picture disc; this is just another notch on Amenra’s plentiful list of splits (most notable their 2011 collaboration with Oathbreaker).

Amenra’s contribution to this record is a reworking of Mass III’s Razoreater. This track has been flayed to its bare bones and given the full acoustic treatment, with only guitar and subtle hints of bass and percussion to back it up. When heard from this entirely different perspective, Razoreater changes from the depraved, almost primitively heavy fan favourite of 2008, to something much starker and sounds chillingly haunting in places. Colin H. Van Eeckhout’s clean vocals have a cheerless, hollow quality to them adding another dimension to this track and making it sound twice as bleak as it already does. This particular rendition of this song goes lengths in proving Amenra’s ability as musicians and shows that they don’t need to hide behind all the smoke and mirrors of heavy distortion in order to sound powerful.

Madensuyu are definitely on the musically more popular end of the spectrum to Amenra, with a loyal following of hipster and indie kids throughout Europe. When pitched side by side with their usual offerings, these two bands are worlds apart. However, considering that Amenra aren’t going for their trademark sound on this split, Madensuyu’s offering Days And A Day fits perfectly. The sombre, almost gothic sounding vocals counter the intensity of the other side of this split and provide contemplative meditations in the form of droning rhythms and delicately plucked guitars.

The artwork certainly provides food for thought and can be perceived as either tree branches or human limbs. Either way, there is something new to discover each time you look and the same can be said of both songs on this 10” too, so all three make a near perfect combination.