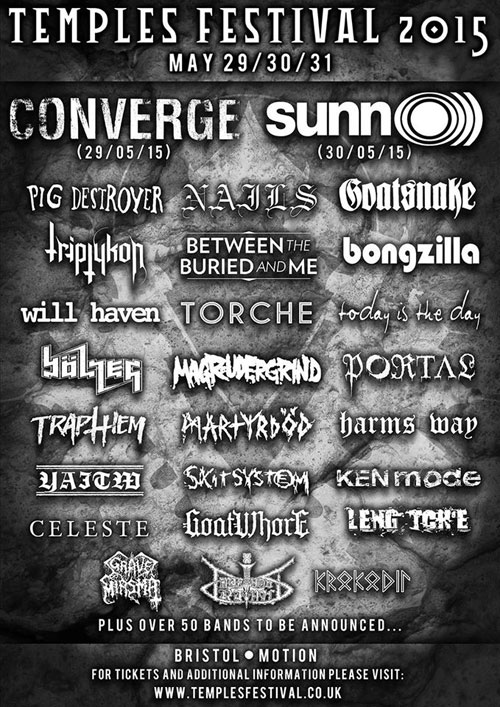 SUNN O))) will be joined on the main stage by the likes of GOATSNAKE, TORCHE and plethora of relentlessly heavy bands on Saturday May 30th.

But that’s not all…… the organisers also welcome the following acts to the Temples Festival 2015 line-up (in no set order);

With over 50 bands still to be announced (including the Sunday night headliner), the addition of a third stage, an outdoor ale/cider bar, high-quality catering suited to both vegan and carnivore dietary requirements alike – and all set within the confines of whats proven to be one the most versatile & unique venues in the UK which is Motion in Bristol, they’re on track for a monumental second edition of Temples Festival.

Weekend Tickets are available from the festival’s website, but be warned – the demand for tickets since announcing the first 18 bands has been very very high, to say the least. They will be releasing Day Tickets much further into 2015, but if you are intent on attending Temples Festival 2015, securing a full weekend ticket would be a prudent move.