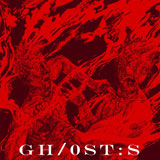 The concept of the GH/0ST:S split dates back to Godhunter and Secrets Of The Sky’s recent Southwest US tour, during which the bands sold a strictly limited run of 100 cassettes bearing this joint effort. Now, the split is back for the rest of us to hear on a wider variety of formats, with two brand new tracks by each band showcased in 40 minutes of heavy doom.

Godhunter kick things off in a suitably brutal manner with Pursuit/Predator, combining vicious harsh vocals with an ever changing series of wonderfully creative, melodic sludge riffs, tied together by an unrelenting drum groove that powers through the track like a herd of elephants. The band in full flow is nothing short of majestic, with maniacally yelled vocals on the edge of collapsing into complete chaos, which inject a sense of danger into the track. In compromise for a somewhat uninspired guitar solo, the band strip the song back to an interesting ‘acoustic’ arrangement in its final moments, utilizing strings and guitar to give a sense of the ‘bare bones’ of Pursuit/Predator being revealed, with all the ominous, morbid connotations that come with the phrase very much intact.

The next track is Godhunter’s chance to introduce the GH/0ST:S theme, a series of haunting, ambient guitar passages that tie the two halves of this release together. In this stripped back, slow context, Godhunter’s minimal approach to lead guitar works much better, but the song is truly tied together with a stunning vocal performance by Julia Deconcini of Young Hunter, which, aided by the fuzzed-out bass part, makes it somewhat reminiscent of Jex Thoth. Over an impressive 11-minutes, Godhunter build layers upon layers, utilising a range of dynamics and atmospheric, repeated whispers and patterns to lull the reader into an almost trancelike state.

The second half of the EP is Oakland’s Secrets Of The Sky’s chance to shine, and they kick off with The Star, showcasing Lance Lea’s excellent drumming with some vaguely Eastern, Kyuss-flavoured jamming. In a standout moment of the entire release, the main riff strikes like a ton of bricks to the face, showcasing the band’s tight, groovy sound, which is making waves in the doom world already. The black metal influence is clear as day here, especially in the high, harsh vocals, but Secrets Of The Sky lend their sound some originality with some ingenious interplay between guitar and vocals, and a very interesting, progressive attitude to songwriting and harmony, lending the track an unpredictable, schizophrenic edge. The band leave us with absolutely no doubt they can live up to the hype, creating a song that manages to stand out in a generally stellar split release. On the other hand, GH/0ST:S II, the band’s second track, feels a little less impressive, focusing on creepy, ominous clean guitar patterns and dark, progressive, Floydian soundscapes. Its certainly trancelike and atmospheric, but after the superb GH/0ST:S track by Godhunter, it all feels a little superfluous, and it would’ve been great to see Secrets Of The Sky trying to add a greater element of originality to a very cool concept for a split EP like this one.

It’s a testament to the excellence of both these bands that I can’t pick a favourite side of this split – ultimately, if you like your doom, slow, modern, crushingly heavy and innovative, or you’re even a casual fan of Secrets Of The Sky or Godhunter, there’s a lot to like here from both bands.