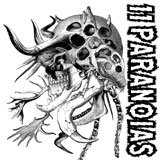 If the lore is to be believed, 11Paranoias formed on the 11th of November 2011 – 11/11/11 – incidentally the same day that de-facto doom overlords Black Sabbath announced their reunion. This numerical oddity may have given the band their name but perhaps by some bizarre cosmic alignment it may also have informed the band’s eerie sound. Consisting of former members of Electric Wizard and Ramesses Mark Greening and Adam Richardson, and ‘the man of a thousand bands’ (most notably and righteously Bong) Mike Vest, it seemed inevitable – even predestined – that 11Paranoias would produce some tripped-out psychedelic doom from the get-go. Last year’s hotly anticipated Superunnatural EP gave us exactly what we had been hoping for – an amalgam of Electric-Ramesses style riffs layered with Vest’s psychotropic drones. Since then Greening has rejoined Electric Wizard, and 11Paranoias have recruited former Capricorns drummer Nathan Perrier to take reign of rhythm duties. Exactly when this personnel change happened and when Spectralbeastiaries was recorded in light of these changes is unclear given the little information currently available, but what is clear is that this album is a different beast (pun acknowledged but not intended) altogether.

In many ways Spectralbeastiaries is the ghostly apparition of last year’s Superunnatural – where Superunnatural was grounded in a deep, doom sound, Spectralbeastiaries feels loftier, less tangible and more interested in exploring unusual spaces in the atmosphere, with often compelling results. Regardless of the line-up at the time of recording, this is very much the same band with the same solid drumming, leading bass-lines, textured guitars and Richardson’s voice still heavily treated with reverb and echo, but the band now seem less interested in simply being crushing. Sure, opening song ‘Cygnus Rift’ ends with a series of devastating blows, ‘Turn To Stone’ is a fuzzy cyclical suite, and ‘Unseen Apparition’ plods along in a doomed fashion but as a whole 11Paranoias avoid simply re-hashing the heavier moments of Superunnatural (such as ‘Deceiver of the Deep’). Spectralbeastiaries is more like the afterglow, refractions of light caught in the dust that Superunnatural unearthed.

For example, ‘Guardian Of The Abyss‘, with it’s cyclical, repeating progression is surprisingly light, resting neither as doom, sludge or anything else you might be expecting from the band, owing more to the space-rock leanings of early Hawkwind than the likes of Sabbath. Similarly ‘The Ghost Projector‘ threatens to turn into the spectral figure of Smashing Pumpkins’ ‘Bodies‘ before taking an altogether noisier and more atonal path, but it is nevertheless an otherworldly and unexpected direction for the band. Such diversions help to keep things interesting, especially for a band whose collective heritage could certainly justify them churning out old-hat riffs-for-the-sake-of-riffs. However the album as a whole is not without some minor faults and some of the songs are heavy in atmosphere while slightly lacking in ambition.

The new line-up has done little to lessen the power and good-will that 11Paranoias’ previous release has garnered them, and this new album suggests a band interested in growing and trying new things rather than resting on their collective laurels. OK, not everything on Spectralbeastiaries pops and occasionally the band get trapped seemingly in a time-warp of repetition, but it’s far preferable that they make a challenging album that expands their vision rather than to simply go through the motions. Already the band’s trajectory has been an interesting one and it’s hard to tell what they will do next, but as they travel through the Cosmos, soundtracking rips in the fabric of Space and Time and taking the form of smoky spectres, 11Paranoias are guaranteed to trip you out and give you the fear. 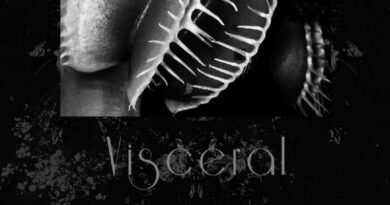