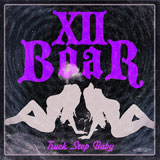 Breaker 1/9, Breaker 1/9! Those filthy-riffing, sludge-swilling swine XII Boar (read: Twelve Boar) are back and slopping at the groove-infested trough once again with a brand new 7” single!

The Hampshire trio, comprised of hobo-with-a-guitar frontman Tommy Hardrocks, beanpole bassist Adam “Bad-Dog” Thomas and grinning-when-you’re-winning drummer Dave Wibraham, snaffled their way out of muddy Hampshire back in 2010 and have wasted little time in tearing the British stoner-metal scene a new rump ever since. Off the back of the thick, salty rind of their crunching self-titled debut EP and the ‘Split Tongue, Cloven Hoof’ mini release came the understanding that these Aldershot-based guzzlers are just as likely to partaay our asses off as much as they are to fry our venues with their crackling riffs and (b)awesome grooves.

Very little changes as we head into new single ‘Truck Stop Baby’, a teaser for the debut XII Boar album currently set to land in sties the world over later this year. Centred around a monster lead riff straight out of the metal n’ roll textbook, ‘Truck Stop Baby’ carries the simple lyrical story of a deep, down n’ dirrrty young lady who likes to, errr, shall we say “frequent” the same truck stop as Hardrocks’ protagonist/narrator. And if that’s too complex for you, it’s basically about a shag-happy redneck whore, a trailer-load of trucking metaphors and the no-doubt unlikely truths behind life on the CB-radio-ruled road. Wibraham’s double-bass drumming is once again as sturdy as a 900-year oak and Hardrocks’ guitar-toting shifts up a couple of notches with a sweetened solo right out of the same rulebook as Bill Steer or Woody Weatherman towards the end. It’s heavy metal through and through and you certainly can’t accuse this band of not brining a smile to the lips wherever they play. All in all, ‘Truck Stop Baby’ is a worthy, fun-filled affair which carries a tasty chunk of pure rock fury throughout.

Side-B offers us a cheeky semi-acoustic remix of ‘Train Wreck’ from the debut XII Boar self-titled release. Still blowing the steam off that choo-chooing lead riff, Thomas and Hardrocks reunite to turn this once bulldozing chug-a-thon into a rather tongue-in-cheek country power ballad. It’s good to hear XII Boar mixing things up and showing us a different side to their ripped jeans n’ baseball hats brand of heavy fucking metal, but just don’t give up the electric day job either lads!

Now up on YouTube complete with a no-holds-barred video featuring juggernauts, juggernorks and the jugger-snorting Boar themselves, this is worth checking out and grabbing the 7” single if you’re a particular fan of the Dozen Chinghale. Be warned: ground-breaking or philosophical heaviness this is not, but XII Boar couldn’t really give a Truck – get in the cab or don’t let their exhaust hit your ass. 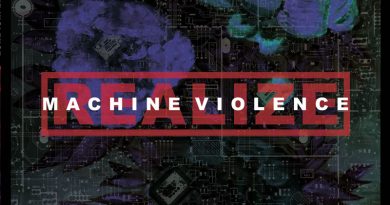