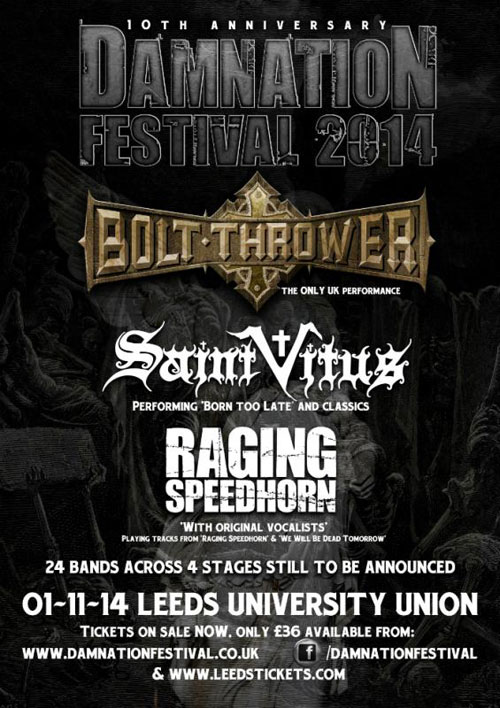 The LA quartet will air their seminal LP along with a selection of classics on the Jagermeister Stage in Leeds, on Saturday, November 1.

The doom stalwarts join headliners Bolt Thrower and reformed sludge outfit Raging Speedhorn on the bill, with 24 bands across four stage still to be announced.

Guitarist Dave Chandler said: “We are very excited to be performing at the Damnation Festival for the first time and it’s even cooler because we are doing it on our 35th Anniversary tour. Two very kick ass things.”

Festival director Gavin McInally added: “Saint Vitus playing ‘Born Too Late’, Bolt Thrower playing their only UK show, Raging Speedhorn back with the original singers to play tracks from their two best albums and record ticket sales with only a fraction of the bill announced… to say our 10th birthday bash preparations are coming along nicely would be a massive understatement! And with one of the planet’s biggest death metal bands and another 23 acts to announce, I think it’s safe to say that Damnation Festival 2014 will not only be the best line-up of the year, but overshadow our previous efforts too. With the continued support of the fans, we’re going to sell this year out and mark our tenth Damnation is style.”