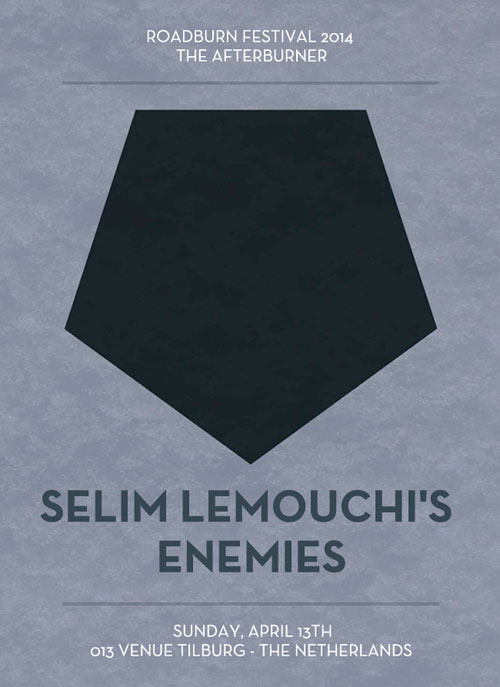 The Devil’s Blood’s first-ever show at Roadburn 2008 was undeniably one of the great moments in the festival’s history. After the group disbanded in early 2013, guitarist Selim Lemouchi began to channel his considerable creative energies into a new project: Selim Lemouchi & His Enemies.

During 2013, the debut EP Mens Animus Corpus was followed by the release of the full-length Earth Air Spirit Water Fire. The album presentation in December 2013 offered a tantalizing hint of transcendent performances to come, and consequently Walter & Co at Roadburn HQ were thrilled to add Selim and his new band to this year’s Afterburner bill.

This month, thrill turned to sorrow with the news of Selim’s death. At first, it was impossible to grasp. How could he be gone? The idea of removing his name from the various Roadburn 2014 posters, press releases and website items was too much to bear. Even after being able to talk with his family, even after having had a little time to grieve, it was still incomprehensible that he would not be joining us.

Selim was inspirational both artistically and personally. He was someone who gave them the courage to keep pursuing their chosen artistic path. On a more personal level, he reminded them to stay true to themselves. He taught them some valuable lessons about life and death through his music and as a person.

Now, thanks to Selim’s sister Farida, also formerly of The Devil’s Blood, and other musical collaborators involved in his last project, Selim will be a part of the festival. Together, Selim Lemouchi’s Enemies will bring Earth Air Spirit Fire Water to the 2014 Roadburn Festival Afterburner on Sunday, April 13th at the 013 venue in Tilburg, The Netherlands.

Walter of behalf of Jurgen, Yvonne and Roadburn.