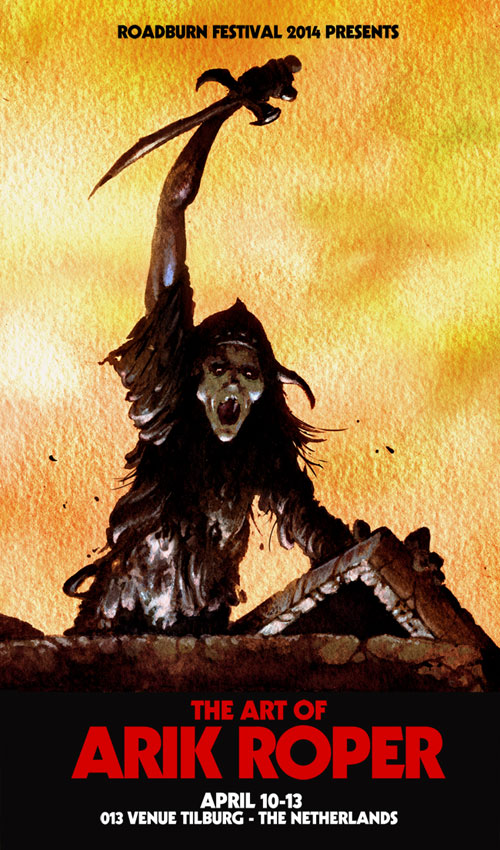 Arik Roper is the man behind many of Roadburn’s favorite works of album art. Earth‘s The Bees Made Honey in the Lion’s Skull, Sleep‘s Dopesmoker, Weedeater‘s Jason the Dragon, High on Fire‘s Blessed Black Wings: these are just a few striking examples of what Arik is capable of dreaming up and creating. During this year’s festival, you can feast your eyes on a selection of Arik’s fantastic work on display at the 013 venue.

Born to artist parents in New York City in 1973, Arik Roper grew up in Richmond, Virginia. He always knew that he wanted to be an artist, too; specifically, he hoped to become an illustrator. Encouraged by his parents, Arik spent a lot of time alone drawing from imagination. During high school he was creating flyers for local bands and even painting latex guts for GWAR. After graduation he returned to New York to attend the School of Visual Arts.

As he remembers, his first commissioned cover was for Buzzoven in 1996. It all grew from there, and in the meantime Arik has become one of the most respected, prolific and sought-after artists when it comes to translating great music into great art. In addition to producing work for many of the seminal heavy rock bands on Tee Pee Records from the late 1990s onward, he took on some design work for The Black Crowes after Chris Robinson personally contacted him in 2004. The two have collaborated on work for Robinson’s solo band, too. We should also mention that Arik is the creative genius behind an intriguing tome called Mushroom Magick: A Visionary Field Guide.

Whether he is working in black and white or rich psychedelic color, Arik Roper’s signature style shines through in everything he does, from lettering to landscapes. The phantasmagorical imagery springs from the depths of a fertile imagination, invoking psychedelic visions, ancient dreams, and idyllic natural environments. With an interest in mythology, consciousness, psychology, religion and other timeless subjects, Roper’s art captures the light and the dark to reveal scenes that somehow manage to seem distantly familiar and even inviting, no matter how strange and otherworldly.

Walter & Co are thrilled to announce that Arik will be on hand during this year’s Roadburn Festival to do some painting, and graciously agreed to let us raffle off this unique piece of art on Saturday, April 12th. More info to follow!