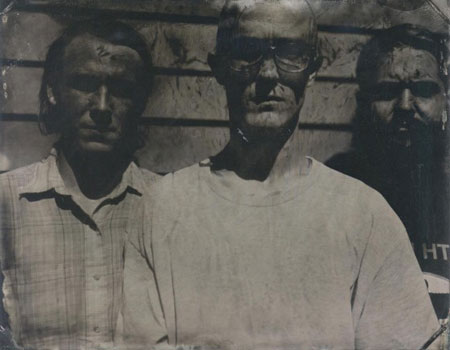 The members of Atlanta-based grindcore trio DEAD IN THE DIRT have completed the writing process for their pending debut LP, and are preparing to set up camp to harness their latest blast-laden auditory dissent in the coming days.

DEAD IN THE DIRT will travel seven hundred miles north, set to record with Andy Nelson (Weekend Nachos) at Bricktop Recording Studio in Chicago the second week of April, armed with a barrage of new songs which will be delivered later in the year as their first full-length release, The Blind Hole. Following their initial 2010-released Vold EP, DEAD IN THE DIRT caught the attention of Southern Lord, who hooked up with the band immediately for the release of their Fear 7”, which bore some of the heaviest music of the year, taking morose lessons from His Hero Is Gone and Cursed to horrifically relentless levels of blasting intensity. The label will continue the tradition, and The Blind Hole will see release through Southern Lord later in the year.

A band who continually takes their societal and politically-based contempt out on the road, DEAD IN THE DIRT have taken part in multiple Southern Lord and The Power Of The Riff events and tours over the past two years, including both East Coast and West Coast US tours as direct support for SUNN O))) in 2012. With much more still in the works for the coming months, a live assault throughout the Midwest and parts of the Southeast US has already been confirmed for the majority of the month of May. The band will also take on Europe for a full month this October and November.

Stay tuned for constant transmissions on DEAD IN THE DIRT. For now endure live footage, and check out the band’s Vold and Fear EP’s via Bandcamp.