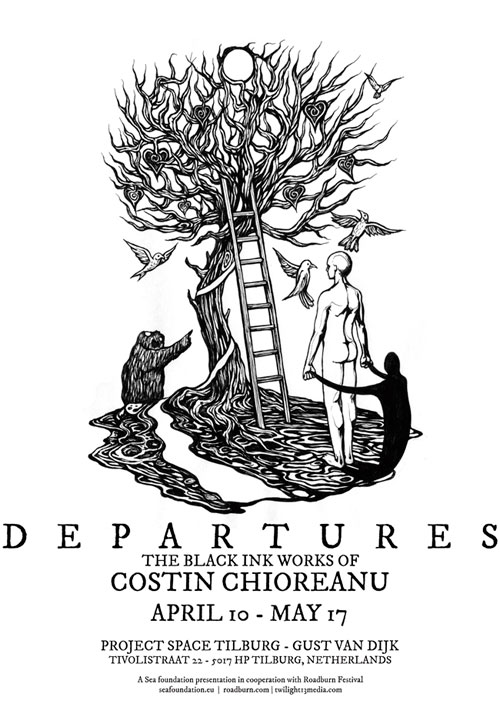 Poster art, visuals and backdrop logo projections have always been an integral part of the Roadburn Festival. All of the artwork is part of the festival’s signature aesthetic.

A new tradition was born in 2011 when Roadburn Festival and SEA Foundation (Project Space Tilburg – Gust van Dijk) joined forces to exhibit Ester Segarra’s music photography. In 2012, the space hosted Voivod drummer and festival co-curator Michel Langevin’s “Worlds Away” exhibition. In 2013, Baroness’ John Dyer Baizley made his European debut as a visual artist at our request.

For 2014, Costin Chioreanu, who has returned for the second year in a row to create the official artwork for the Roadburn Festival, has been invited to share a selection of his black ink art from various moments in his career so far.

Today, he has emerged as one of the most talented artists in the realm of avant-metal and dark psychedelica, producing work for the likes of Darkthrone, Ulver, Triptykon, At The Gates, Spiritual Beggars, Candlemass, and Opeth among others. Whether the images he conjures are disturbing, provocative or enchanting, they consistently show great finesse, sensitivity and depth.