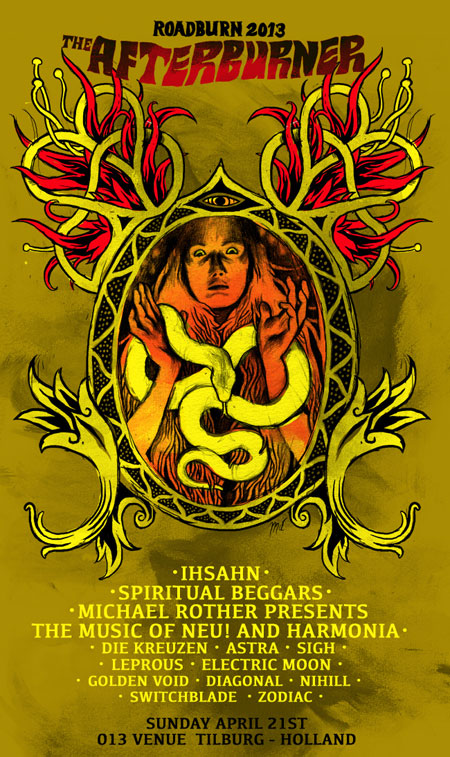 The Sunday Afterburner was originally created to serve two purposes: one, to give die-hards a way to hang onto the trip they were on; and two, to give the uninitiated a way to enjoy a taste of Roadburn without making a three-day commitment. In the meantime, the Afterburner has evolved into something much more than an afterparty or intro to Roadburn.

Perhaps the best way to describe it is “the Droste Effect,” which refers  to a picture appearing within itself. The name comes from the iconic illustration of a woman holding a tray with a cup of hot chocolate and a box with the same image on the Droste cocoa powder tins and boxes in the Netherlands in the early 20th century. While the Dutch didn’t invent this visual phenomenon — objects depicted within themselves can be found in pre-modern mosaics and 19th century coats of arms — “the Droste Effect” is a good way to sum up the Roadburn Afterburner: the ultimate festival-within-a-festival!

This year’s Afterburner  set for Sunday, April 21st at the 013 venue in Tilburg, Holland, serves in part to celebrate sax, prog and rock and roll. The ever-innovative headliner Ihsahn backed by Leprous happens to combine all three with an unmistakable symphonic metal twist. Astra, Diagonal, Electric Moon and Golden Void (with Isaiah Mitchell from Earthless) offer a tantalizing array of psychedelic and progressive sounds to mesmerize and energize. Spiritual Beggars and Zodiac will be on hand to serve up juicy riffs and strong melodies.

Of course, it would not be an Afterburner without at least one legendary group or solo artist, and this year we are thrilled to have both: Milwaukee’s punk heroes Die Kreuzen as well as Michael Rother, founding member of the legendary Krautrock pioneers NEU! and part of the innovative Harmonia, accompanied by Berlin’s very own Camera. If the 2013 Afterburner seems like a leisurely Sunday brunch, wait until you get an earful – and an eyeful! – of Japan’s Sigh. For more uneasy listening, watch out for Holland’s own Nihill and Switchblade‘s lacerating doom.

In keeping with tradition, bands will be playing the Main Stage and the Green Room in the 013 venue. Merchandise will be available in Stage01. Tickets are currently still available.

Salute To The Sun With Black Pyramid At DesertFest London 2015!