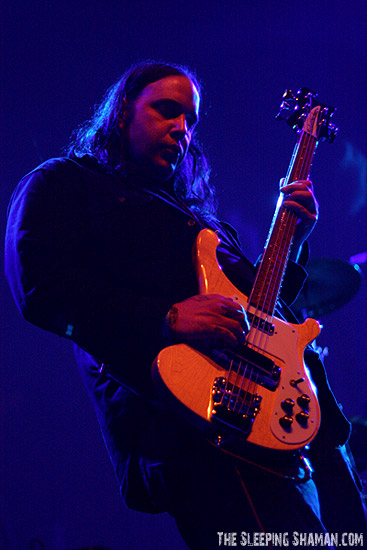 Rejoice! OM‘s interplanetary trajectory has aligned with ours, and they’re heading our way… The coordinates have been keyed in, the destination of Europe in sight, all ready for a November touchdown amid jets of synth, thrusts of earth-disturbing bass and clouds of alluring alien gases. Celebrate and prepare, for the trio of Al Cisneros, Emil Amos and Robert Lowe are a force to be reckoned with and relinquished to.

OM‘s latest album is one which roars so loud it can’t be ignored. Advaitic Songs maintains the singularity of purpose that informs the core sound of OM, yet every element reaches further than before. Whatever drone-doom genre that had been hoisted on the duo in years past has been decimated by the sheer imagination, expansive quality, and meticulously detailed arrangements of Advaitic Songs. For a band that has continually followed its own course, and stood alone in its sound and approach, Advaitic Songs for certain, is the band’s most focused, progressive document and you can read Tom’s review on this very website HERE.