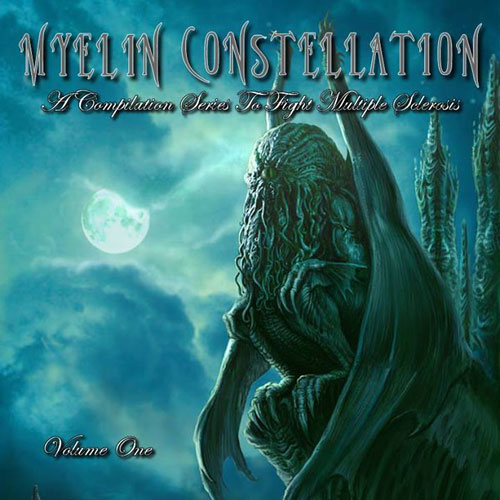 Matt Schmitz, he of Sleestak fame, recently contacted The Sleeping Shaman about a Multiple Sclerosis Benefit Compilation he’s putting together after his wife was diagnosed with this debilitating disease, read the official press statement from Matt below and please support this worthy cause…

This past April, my wife Kim was diagnosed with relapse/remitting multiple sclerosis. We have been dealing with her symptoms for several years which have included horrible fatigue, muscle spasms, depression, pain, digestive problems, numbness, and more recently even cognitive and sight issues. The doctors we had visited never once mentioned MS as a possibility and she was being treated in a compartmentalized manner, i.e. take this medication for depression, take this other pill for pain, and so on and so forth. We were told she just had all these seperate health issues with nothing she could do but take pills. Finally, after her left side (including her face) had went numb we went to an Urgent Care clinic. The quack doctor there saw us for literally less than two minutes, concluded she was getting shingles, and told me in earshot of every other patient and staff member that we should not worry, that she did not have a stroke, and that she did not have MS. He handed us a shingles pamphlet and told us to follow up with our primary doctor in a week. We proceeded to do so and visit our new primary doctor established based on a change in our insurance. Luckily we did as this was the first time a doctor suspected she had multiple sclerosis and soon thereafter we had a diagnosis and were able to put a name on the cause of all these things that were going wrong with Kim’s body.

I consider us lucky in a sense: we no longer have to wonder about certain things, we can establish a plan for ourselves, and now we can do everything in our power to try and fight this as best we can. We also have insurance to help somewhat. I cannot imagine the position we would be in without it. Mind you, all is not golden. We have accumulated well over $5000 in medical bills and it’s continuing to rise and set to go on for the rest of her life. This has put me into a corner with trying to take care of my family in the ways I need to provide. Kim is in-between treatments right now after quitting a brutal regiment of the Copaxone daily injection, leaving her with softball-sized welts, hardening tissue at the injection sites, and not the least of which is more pain. The plan right now is to try a daily pill treatment of Tecfidera. In the coming months, due to the looming Obamacare, we are expecting an insurance “glitch” as told to us by her neurologist where there may be a few months when her treatment is not covered. This pill is $55,000 a year wholesale. Needless to say we are nervous about this, on top of our mounting doctor bills.

I have been brainstorming about ways to help my family get through this and I came to the conclusion to do a benefit compilation. I have seen how these have helped others in need, including Ed from Doommantia. Here is my plan though: the comp I put together is going to be unique in several ways. First, on the music side of it, most all of the submissions are special in the fact that they are live, rare, demo, unreleased, or alternative version of songs, some being even exclusive to this collection. In this regard, the bands I have been in contact with have been absolutely amazing in their support and their willingness to dig through their archives. I have already met some incredible folks through emails from putting this together and one thing I am encountering is the number of people in our scene who have been affected by this disease. This has led me to want to do even more than help my own family. I want to do more music compilations, multiple volumes, to help others affected by MS, to raise awareness about it as well as money to donate to those less fortunate in their situation, and for organizations who are dedicated to the fight. One example is to get people on board here in Wisconsin and other states to legalize CBD, a component of marijuana with almost miraculous medicinal qualities and no psychoactive effects, which, as far as I know at the moment is still considered Schedule 1 even though it doesn’t get you high. Other states like California now have access to this for people with neurological diseases but not Wisconsin, which has the highest number of MS cases in the country. So, there you go. I have got some fight left in me and I want to do something with it.

Now for the juicy details of the comp. It is being called “Myelin Constellation”, myelin being basically the protective coating around nerve bundles, which in MS deteriorates and exposes the nerves to all the symptoms that are talked about. The “constellation” part is in reference to all the bands and individuals who make up the scene as a whole, worldwide. There are several bands which I can name drop at the the time of this writing that are getting involved: The Gates Of Slumber, Northless, Sons Of Otis, Backwoods Payback, Wo Fat, Stone Magnum, and Coltsblood. There are a bunch more which will be confirmed in due time and I am blown away by some of the bands which are lending their support – these are some heavy hitters and names you will know. While no solid release date is set right now, we are aiming for a mid-late September digital download on Bandcamp. I also want to thank a few individuals who have lent their talent and help to get the ball rolling on this: Steve Somers for the wicked awesome artwork (http://stevesomersart.blogspot.com), Mike from Days Of The Doomed festival, and Lee from The Sleeping Shaman. I consider these guys good friends and good people along with all the bands who are getting behind this. I THANK YOU and my wife, Kim THANKS YOU.

Stay tuned at the respective websites: http://mconstellation.bandcamp.com and http://facebook.com/mconstellation for updates as they are available.