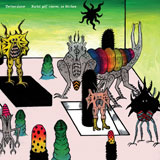 The recent furore at Muirfield Golf Club opened much debate over whether it was acceptable to have a ‘no women’ policy in the 21st century. Surely, this would be as good a time as any to weigh up what Dethscalator have to say on the matter. Well, not really, since their debut LP ‘Racial Golf Course No Bitches’ isn’t really about that. Actually, fuck knows what it’s about. It’s noisy, unhinged, incoherent and with song titles like ‘World War Two Hitler Youth Dagger’ and ‘Aids Atlas’, it’s absolutely brilliant in a demented genius, Young Ones kind of way. The effect is doubled with the creepily simple artwork, like a child trying to reinterpret the contents of David Cronenberg’s skull, extraterrestrial phallocentrism and all, gearing the listener up for an assault that’s punishing but never quite takes itself too seriously.

To set the scene, Hackney’s Dethscalator have been around for five years and in that time have rocked Supersonic Festival, played with Fucked Up and Zu and recorded a bitchin’ split with serial skullfuckers Hey Colossus but this marks their first solo full-length, and anyone who has even heard rumours of them will have an inkling of what lies in store here – 10 tracks of sludgy, beat-you-with-a-shovel noise rock that gradually winds down into utter chaos while a man (well, we can only assume it’s human) hollers incoherencies like a frothing lunatic with The Fear, amplified, distorted and delayed until any hint of restraint is relegated to nostalgia.

‘Black Percy’ opens the show in a confrontational, if deceptively organised, way – short and bittersweet, it’s guttural rock and roll that trundles headlong into hell and in a way it’s almost fun, the hardcore drubbing hardly suitable as a party soundtrack unless it involved copious amounts of cheap speed but definitely worthy of some drunken fist-pumping. It’s the appearance of ‘Grotto Crank’ that upsets things somewhat, the stop-start mathematic grunt and grind fiercely unpredictable and as each chord hits, it’s like a bucket of scrap metal is being showered down upon unsuspecting scalps. There is no longer a vocalist because if words are what Dan Chandler is spewing out, they’re camouflaged by the kind of pained howls normally found only amongst the ill and dying, flayed of all rationale and marking a descent into madness that’s perversely inviting.

The conflict between discord and guttural riffing is a particularly prevalent one on this album, particularly towards the latter half, where ferocious sludgebeasts like ‘Aids Atlas’ wrestle with insanity and the desire to cripple with surging tides of gritty downstrokes – if Unsane were to lose that calculating, predatory groove and simply go a bit mental with an axe, they could be best mates with this lot – but ultimately it’s their deranged, instinctive side that wins out because Dethscalator seem to thrive on what makes everyone else uncomfortable, twisting lyrics into animalistic murmurings and immersing themselves in a sheep-dip of noise and distortion, spacey effects bubbling up in rare moments of calm to keep the delusional tension intact. The riffs only provide temporary footholds, hooks to latch onto before they disappear and plunge you into the miasma once again.

Strip away the noise, bluster and atavistic vocals and you still have a beast of an album, the sort of stoner-sludge monolith that The Jesus Lizard would have made if they’d been raised on a diet of razors and stale Weetabix but their violent unpredictability goes a long way to giving them their appeal. Anyone can sound big, noisy and brash, and throwing in a spacey segue or two is de rigueur for many, but to make something this unnerving, confrontational and to maintain a healthy wit while doing so? Well, that’s why this album is such a monster. It might be of niche appeal but to those who get it, it’ll undoubtedly find itself on regular play for a long time to come.