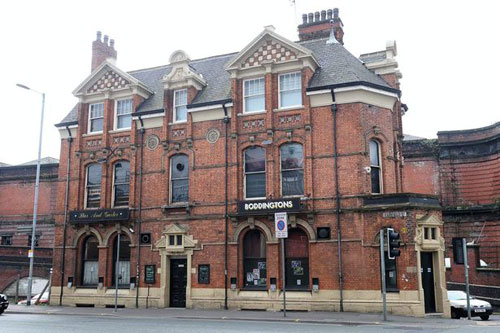 We at The Sleeping Shaman have been involved with and enjoyed many a heavy night at Manchester’s premiere live music venue THE STAR & GARTER and we were shocked to hear the news of it’s possible demolition last year, but all might not be lost as Council Leader Sir Richard Leese has now spoken out about saving this legendary venue with this article that was published today on the Manchester Evening News website…

A musical landmark threatened with demolition has been given fresh hope – after a council boss called for it to be saved.

Legendary venue the Star and Garter – a Grade II listed pub famed for its Smiths’ disco nights – could make way for a dramatically revamped Piccadilly Station.

As part of a radical expansion, rail chiefs are considering knocking it down for a new rail viaduct and road.

Fans of the indie haunt reacted with horror when plans were revealed last summer. But ahead of Manchester council’s own formal response to the proposals, leader Sir Richard Leese has now aired his own view publicly for the first time.

He says other options put forward by Network Rail – neither of which would involve demolition – would be preferable.

They would create less disruption to the area around Fairfield Street, he said, better tying in with regeneration plans for the area surrounding the old Mayfield railway depot.

He added: “Generally all the logic points to either of the options that avoid demolishing the Star and Garter.

“That’s not because we should be protecting the Star and Garter, but because those options make more sense for other reasons.”

The proposals form part of the £560m Northern Hub rail masterplan, which will add two platforms to Piccadilly Station.