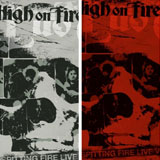 Ever since they emerged with their debut album ‘The Art of Self Defence’ back in 2000, Oakland’s power trio High On Fire have been turning heads with their feral brand of Motorhead meets Slayer meets Discharge meets Stoner Rock. Over the course of their career to date they have released some of the most exciting and hardest hitting records around, earning them a trio of albums on renowned Independent home of extreme music Relapse, before switching to eOne Music, widely regarded as the top independent labels in the United States and for Europe this release is handled by Century Media.

Having earned a reputation for being hardened road warriors High On Fire have chosen to release not one, but two live albums for their first official live documents. Spanning their entire history ‘Spitting Fire Live’ (Volumes 1 & 2) perfectly backs up those who have labelled them one of the best live bands you will ever see by perfectly capturing the sound and intensity of their performance up close and personal in New York’s Bowery Ballroom and the Brooklyn Music Hall of Williamsburg respectively.

‘Volume 1’ crashes straight in with an almost perfunctory introduction, no messing around, no build up, just the briefest of announcements before opener ‘Serums Of Liao’ from latest album ‘De Vermis Mysteriis’ elbows it’s way in, the band at their snarling best, riding the crest of a furious wave as they assault the senses. Above the cacophony vocalist Matt Pike clearly putting the demons of the past behind him as he delivers a towering performance that sees him crooning and commanding in the unhinged manner anyone familiar with the band will have become accustomed to.

The albums have been recorded and mixed with a view to reproducing a snapshot of the power of the bands live shows and there is a raw, stripped down feel to Spitting Fire Live that is so authentic if you close your eyes you can smell the humid air, feel the sweat on the walls and see the bodies in the pit. Having endured a torrid time in the build up to this North American tour, there is a sense of catharsis to the performance and you can literally feel the band thriving off the chaos as it unfolds.

The pace at which the album progresses is breath taking, barely pausing to introduce ‘Frost Hammer’ from 2010’s ‘Snake For The Divine’, Des Kensel virtually flattens the crowd with his thunderous drumming; but that is not to say the seven tracks are merely a breakneck blur of aggression, the band have infused their songs with a real sense of dynamics. Pikes blistering guitar work and the ragged melody in the middle section of ‘Frost Hammer’, the dirty, rumbling bass from low end merchant Jeff Matz that lends a belligerent groove to a sublime rendition of ‘10,000 Years’ from their debut and the stomp along moments when they briefly take their foot off the pedal with another early track ‘Last’.

There is little crowd interaction other than cursory introductions for a live album, but the set is one of focused intensity and frankly when you hear the band blast through the frenetic, churning thrash of ‘Devilution’ and the face melting blast of closer ‘Speedwolf’ it’s a churlish listener who wants to sacrifice this intensity.

‘Volume 2’ clocks in at a whole track longer, but carries no less momentum. Opening with a blistering version of ‘Rumours of War’ from their acclaimed ‘Death Is The Communion’ album, the second set picks up where the first left off, following up impressive statement of intent.

To say the second volume is cut from the same cloth is both accurate and yet doing the band a disservice. Sure there are minimal moments of connection with the crowd other than the music, but with this selection more than the first, High On Fire open up their more eclectic side. Granted this is still delivered in the same uncompromising style, but among the vicious mosh pit fuel of the likes of ‘Fury Whip’ and ‘Snakes for the Divine’ there are tracks like ‘Dii’ with its dizzying instrumental section and the more progressive ‘Madness of An Architect’. The band strike a balance between the mad frenzy of their most brutal arsenal, going for the throat with the attack of ‘Hung, Drawn & Quartered’ and the crushing grooves of ‘Blood From Zion’ and the crunching stomp of ‘Faces of Oblivion’.

Essentially severing as a career spanning best of album, ‘Spitting Fire’ is a delight for the uninitiated and a reminder for those in the know, just how talented a band High On Fire are.

You could grumble that there could be more crowd participation for a live album; you could pick out your favourite tracks that may not have made the cut (for me I would have loved to have heard the flat out brutality of ‘Come Down Hessian’) but honestly these things shouldn’t take away from the fact that High On Fire are an incredible force to be reckoned with – this album (these albums) just rock and rock hard. In amongst the churning maelstrom there are real moments of dexterity and class, just like on their studio output, but here they are alive and revelling in the raw environment and that passion translates to the music, making this a great addition to their catalogue for completists and new comers alike.