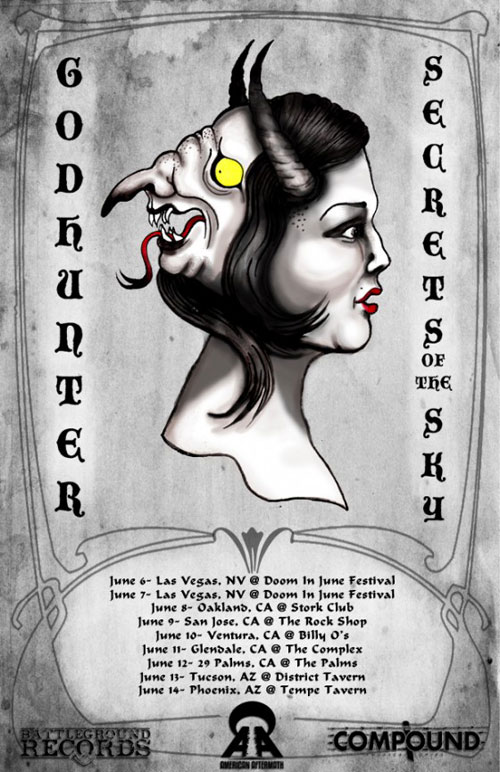 Oakland’s progressive doom powerhouse, SECRETS OF THE SKY, and Tucson’s bastard sons of sludge metal, GODHUNTER, will converge for their co-headlining tour in Las Vegas this weekend at the Doom In June Festival where they’ll share the stage with Novembers Doom, Christian Mistress, Acid Witch, Ides of Gemini, Demon Lung and more this Friday, June 6th and Saturday, June 7th. From there, both acts will traverse through the West Coast and Southwestern states, the tour sponsored by American Aftermath. The new trek will hit Oakland, San Jose, Glendale, Palm Desert, Tucson and Phoenix through June 14th.

A split cassette release between SECRETS OF THE SKY and GODHUNTER will be available for the first time in a limited run of 100 copies on the upcoming tour. This is the only place the album will be released until the Autumn months, when The Compound and Battleground Records will co-release a deluxe colored vinyl version and digital download, in time for Southwest Terror Fest III: The Western Front, where they’ll both perform in the four-day event including Neurosis, Sunn O))), Goatsnake and tons more. Entitled Ghosts, both bands contribute brand new material to the split album both showcasing experimenting with new elements. Details on the LP edition will be released during the Summer months.

American Aftermath recently interrogated both bands on the upcoming split, tour and loads of other topics. Read more on SECRETS OF THE SKY right HERE and GODHUNTER HERE.

Bearing the subtitle, A Conversation Between Hope and Despair, the fifty-minute dust storm of groove-laden, resin-coated sludge metal intensity GODHUNTER’s City Of Dust debut LP delivers is the most concise, diverse, and infectious hymns from the politically-motivated outfit to date. Through a brutally honest outcry the album boasts thought-provoking, thematic tirades against the governmental members and parties responsible for a wide array of vital societal issues. Released through a union of Earsplit’s label, The Compound, and GODHUNTER’s Battleground Records, City Of Dust is available in a deluxe 180-gram clear vinyl with rose splatter, poly-bagged with a black poly-lined sleeve and full-color 12”x24” lyric/liner sheet, as well as eco-friendly digipak.