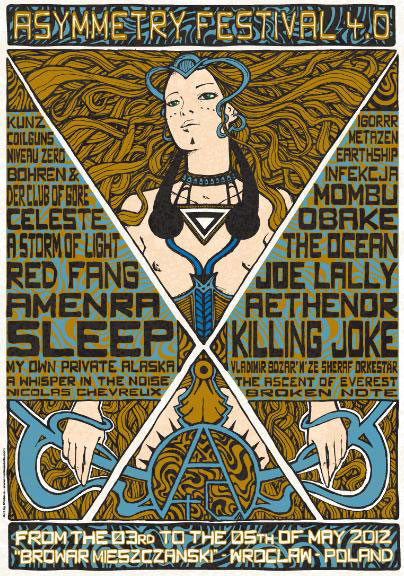 Asymmetry Festival is an annual event, taking place in Wroclaw, Poland. The aim of the festival is mixing and showcasing diverse artists in a single festival space. Artists who roam the verge of stylistics like metal, rock, electonics, experimental music – alternative music, generally speaking. This year’s event will be the fourth edition of Asymmetry.

Furthermore, this edition will be a ground-breaking one, as it moves out of the organizer’s Firlej club, into a new space – Wroclaw’s Bourgeois Brewery – a beautiful industrial complex from the XIXc. Thanks to this move, the festival will feature three stages (instead of one, like in the case of previous years) between 3rd May 2012 – 5th May 2012.

Now a little bit on Asymmetry 4.0‘s line-up – so far we have confirmed performances by Sleep, Killing Joke, Aethenor, Amenra (who will appear twice), Bohren & der Club of Gore, Obake (with Trevor Dunn of Fantomas/Mr. Bungle fame), Red Fang, Black Tusk, A Storm Of Light, Celeste, Broken Note, Igorrr, Niveau Zero and many others (with more to come). The line-up expresses our interests with different, often quite remote music genres.

More information on Asymmetry Festival 4.0, tickets and artist line up over at http://asymmetryfestival.pl/en/.