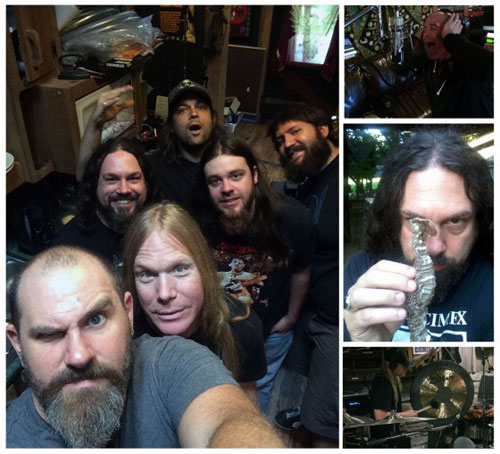 Los Angeles, California’s GOATSNAKE are back in a big way – having spent the summer at Rock Falcon studios in Franklin, Tennessee they are gearing up to release their first new full-length album since 2000’s Flower Of Disease.

The new album, due for a release on Southern Lord next year, will feature the familiar faces of Greg Rogers (The Obsessed, Sonic Medusa), providing drums, Greg Anderson of Sunn O))) taking care of the riffs, Pete Stahl (Scream, Wool, Earthlings?) on vocals, and new bassist Scott Renner (Sonic Medusa, Sourvein). Joining them again on production duties is Nick Raskulinecz, who, since being introduced to Dave Grohl during the recording sessions of Flower of Disease, has gone on to work with seminal artists such as Rush, Alice in Chains, Deftones and Ghost, and has won Grammys with the Foo Fighters. United again, he and the band are sure to serve a menacing cut of the time-honoured ultra-heavy rock they are infamous for.

GOATSNAKE began life in 1996, and released two EPs, two LPs, two 7″ records and a split during the years 1998-2000. In 2010 they returned as a live band, playing a handful of well-received shows in the US, the UK and Europe in the years since.

More details of the upcoming album will be announced soon. For now, take comfort in the news that fans will definitely be able to catch GOATSNAKE live next year at Temples Festival, taking place in Bristol, May 29-31st, alongside acts including Sunn O))), Today Is The Day and Martyrdöd. Fans in North America needn’t wait that long as GOATSNAKE shall be playing the following two shows this October: