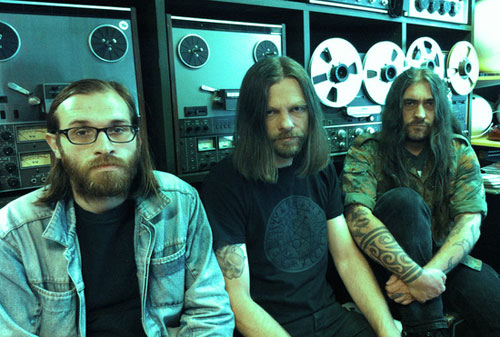 London-based psychedelic doom trio, 11PARANOIAS, have today announced details of their forthcoming album, and unveiled the first track to be taken from it.

The album, titled Stealing Fire From Heaven, will be the third release from the band, following on from their 2013 offering Superunnatural, and Spectralbeastiaries which was released in March 2014. The first track to be unleashed is Surrealise – a sultry jam that starts of with sleazy, sepia-toned sax before breaking out to segue into an earth rumbling doom groove, now stream it below:

11PARANOIAS encapsulate otherworldliness and psychedelia, drawing in inspiration, and spewing out the results in a devilish cocktail of riffs, fuzz and fury. Formed on 11/11/11 with a jam that set them off on this eventful musical path, the band has relied on improvisation and instinct throughout; at no point more so than when it came to record Stealing Fire From Heaven. With no songs written or rehearsed, the band decamped to the studio on the summer solstice to lay down the seven tracks that make up the album. The results are a heady mix of low swirling grooves, super heavy psych and seriously uneasy listening.

Adam Richardson (bass/vocals) provides an insight into the recording process for the album:
“We have made full use of the ‘automatic’ process again on Stealing Fire From Heaven – not just the lyrical/incantation aspect, but the entire process – and it has rewarded us with this ‘unseen apparition’ which we love! It takes guts, blood, trance dwelling exploration of inner and outer space, and an unflinching will to make a record in this method….

Surrealise, despite its ‘born of nothing’ approach, delves naturally into a mournful lament, of ‘killing sadness’ – that could only be divined and not written. We have coaxed Stealing Fire From Heaven from our consciousness and the stars into this dull dimension we (think we) know. Any idiot can write a great song, learn it and record it, but this traditional approach has become dead to us…

The solid trio at the core of the fuzz-fuelled fury are Adam Richardson, Mike Vest (guitar) and Nathan Perrier (drums), who each bring their own past experiences and weight to the table. Stealing Fire From Heaven was recorded and mixed in the summer of 2014 at London School of Sound and XL Recordings. Adam Richardson also played keyboards on the record. Saxophone and synth is contributed by Austin Milne.

Stealing Fire From Heaven will be released on 10th November 2014 via Ritual Productions. Further details of the album, including pre-order information, will be made available in the coming weeks. The phenomenal artwork for Stealing Fire From Heaven is a piece by celebrated pioneer of the Surrealist art movement, Max Ernst, entitled The Temptation of St Anthony. The artwork can be seen below. 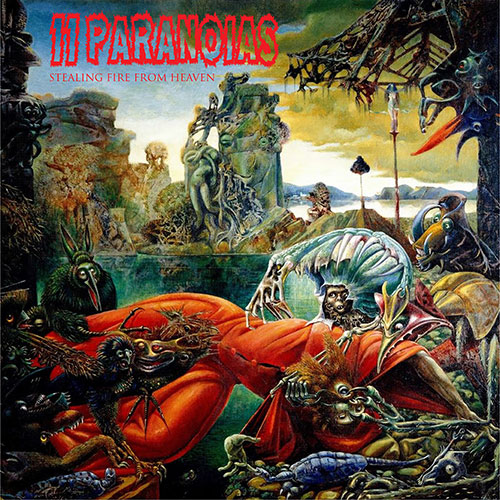 Stealing Fire From Heaven track listing is as follows:

1. The Great Somnambulist
2. Paranoiditude (Beyond The Grave)
3. Surrealise
4. At The Cursus
5. By The Light Of A Dying Star (Neutron Start)
6. Lost To Smoke
7. Retribution of Dreams

11PARANOIAS will play the following shows: