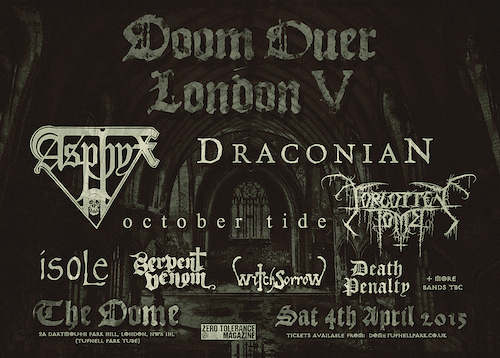 DOOM OVER LONDON has just announced the latest additions to their stellar line up for 2015. Death Penalty and Witchsorrow will join the bill for the event due to take place at The Dome, Tufnell Park on Saturday 4th April.

Now in its fifth year, DOOM OVER LONDON brings together both up and coming new bands, as well as long standing favourites – all tied together by a common thread of doom. For the first time, the event will take place in its new home at legendary north London venue, The Dome.

The current line up for the event is:

Asphyx
A UK exclusive for the Dutch legends, it will be their first time on British soil since their reformation.

Death Penalty
Another exclusive; this will be the first UK show for the band that features ex members of Cathedral and Serpentcult.

Draconian
A hypnotic soundtrack of apocalyptic proportions. First time in the UK.

Isole
Swedish doom by the bucket load, and with new album ‘The Calm Hunter’ just released, Isole are ready to return to UK shores.

October Tide
Formed as a side project by original members of Katatonia, October Tide perform the essence of death doom metal. First time in the UK.

Witchsorrow
A new album is expected later this year from this heavy, heavy doom trio.

More additions will be made over the coming weeks. Stay tuned on the DOOM OVER LONDON Facebook and Twitter accounts for all news and information as it happens.

Early Bird tickets have sold out, but regular tickets are available to purchase here, priced at £29.50.