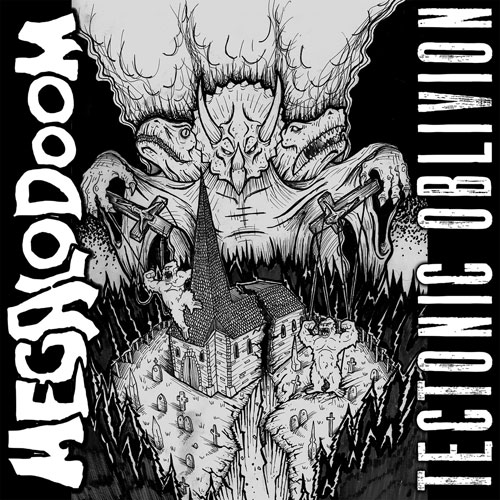 Humongous instrumental doom quartet MEGALODOOM (featuring members of Bismuth, Year Of The Flood, Nadir & Death Tripper) will be playing the official Desertfest warm up show tomorrow night at the Black Heart, so to celebrate, the band have just released their new EP ‘Tectonic Oblivion’ online as a free (or ‘name-your-price’) download!

Despite only forming at the tail end of 2012, MEGALODOOM have already honed their massive, doom laden sound to near perfection. Forgoing vocals in favour of letting their planet shaking riffs speak for themselves, the band have already caught the attention of Tartarus Records and Dry Cough Records (who released their killer debut EP ‘Indiana Jones & The Temple Of Grief’ on tape last year), the organisers of Desertfest (who have booked the band to play the event’s pre-party tomorrow night) and even the mighty Kirk Windstein, (who was seen sporting a rather fetching MEGALODOOM t-shirt onstage after the band supported Crowbar at a recent Nottingham show), and after one listen to the band’s new EP, we think you’ll understand why…

‘Tectonic Oblivion’ is the heaviest thing the band have recorded so far, and is a great introduction to their monolithic sound. The EP is also due to be released on cassette this summer as a joint release between Witch Hunter Records and Tartarus Records, with some killer artwork courtesy of the very talented Daniel Hewson, but if that seems like too long to wait for your daily dose of riff related goodness, then hit play below or head over to the Witch Hunter Records Bandcamp page to download your own copy right now right HERE!

And, as previously mentioned, MEGALODOOM will be playing at the official Desertfest Pre-Party tomorrow night alongside fellow riff enthusiasts Sedulus and Gurt. The show kicks off at the Black Heart at 7:30PM, and costs just £6 to enter (or £5 if you’ve got a Desertfest ticket)! For more information about the gig, click HERE.