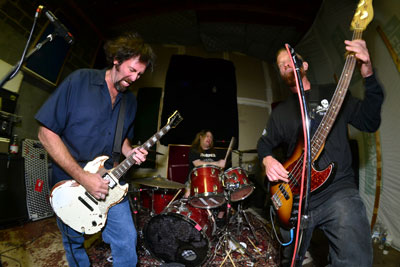 Gathering last summer to jam as a trio for the first time in over a decade, the treasured threesome quickly rekindled the magic that originally united and ultimately bound the musicians on a journey that today continues to impress both fans and critics. It is the efforts of this line-up that Decibel Magazine recently called “a crucial stylistic lynchpin in the bridge between metal and punk. CORROSION OF CONFORMITY irrevocably reshaped crossover’s sonic possibilities.” AllMusic.com notes, ”C.O.C. weren’t following any trends. They just incorporated all the things they liked about thrash, punk and ’70s metal originators Black Sabbath into their constantly evolving sound. It secured them artistic and commercial credibility.”

Candlelight’s Steve Beatty says of the signing, “Animosity is one of my favorite records ever. To have C.O.C. on Candlelight with that line-up is simply mouth-watering. I saw the band in London recently and they did not disappoint. This hungry child can’t wait for the record.” Candlelight’s Edward Christie adds, “we are extremely excited to welcome the band to the label and are looking forward to an amazing album. We are all huge fans and this is truly a memorable day for all of us.”

The band shares the excitement the immediate future holds. Woody Weatherman comments, “writing and recording this new record as a three-piece has been a blast. Having Reed back in the fold with Mike and I brings it around full circle. I’m really looking forward to all that lies ahead this upcoming year.”

Reed Mullen adds, “Mike, Woody and I essentially learned how to play music together and cultivated our own style, sound, and unspoken language. Re-bonding with them musically has been the greatest thing that’s ever happened to me.”

In addition to intense work on the album, CORROSION OF CONFORMITY has kept busy in 2011 touring throughout the US and abroad. One of the main attractions at this year’s Maryland Death Festival, the band mesmerized a salivating capacity audience. Sean Palmerston, editor for Canada’s online magazine Hellbound, said, “I lapped this set up. It was like the tastiest comfort food after a hard day’s work. I haven’t listened to those classic C.O.C. albums in a long, long time. It put a smile on my face.”

Mike Dean says of the new songs, “we have been overdubbing vocals and guitars in between our live dates for the better part of a year. Now it’s time to mix. The process we started back in April is finally coming to fruition. The results should reflect all eras of the band’s existence filtered through our current reality. This is a beast we can’t wait to set free.”

Formed in Raleigh, North Carolina in 1982, CORROSION OF CONFORMITY quickly transformed heavy music. Politically charged and socially aware, the band has influenced countless others and today remains humble about their accomplishments. With over 1.1 million albums sold in the United States alone, the new album will be their first since 2005’s In The Arms Of God. On release, Billboard Magazine called the album a “riff-fueled set that ranks with (the band’s) best work.”

CORROSION OF CONFORMITY will perform with Danzig tonight at the Gibson Ampitheater in Los Angeles. The band’s final performances for 2011 will be alongside Clutch December 27 through 31. Tickets are on sale now via Ticketmaster and venue box offices.