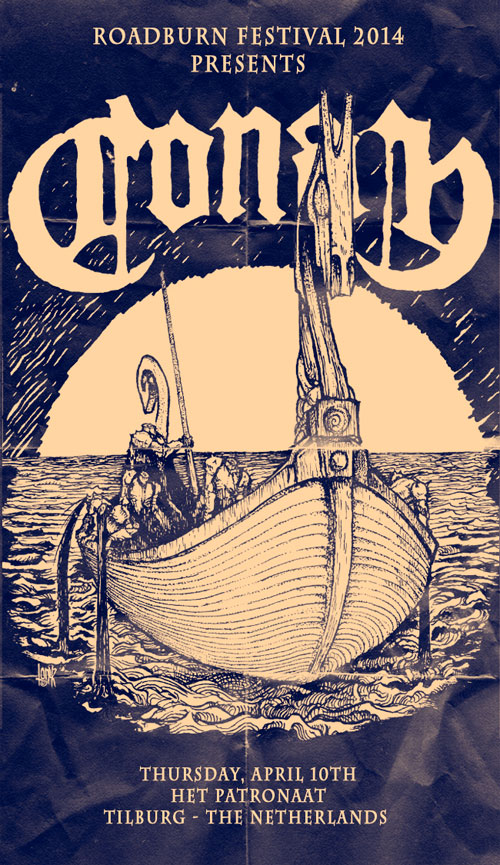 Steady thine self o’ weary warrior and gird thy fetid loins, for the mighty masters of extreme sphincter-ruining riffology themselves, Conan (whisper their name only, for they slay those who take their name in vain), are booked to blast away the putrescent flesh from off your bones for Roadburn 2014 (at Het Patronaat, Tilburg, The Netherlands, 11th April).

No others quite lay down the doom-saturated minimalism like this Liverpool power-trio, who have muscled their righteous way towards the surface of the murky pond from relative unknowns back in 2006, via such preposterously heavy recordings such as their classic 2010 debut Horseback Battle Hammer and their last ferociously brain-blistering release, a split 12” with Bongripper (the monumentally lumbering 16 minute sludge-goliath that was ‘Beheaded’).

Jon Davis (vocals and guitar), Paul O’Neil (drums) and Phil Coumbe (bass and vocals) comprise the leaden unit that is Conan, and together they have supported such names as Sleep, Eyehategod and Ramesses in the past, in addition to imploding under their own cosmic mass at Roadburn 2012. Beware though – it is writ in the famed annals of Tsathoggua: “Behold the three from that ancient seaport on the Mersey – Conan – NONE IS HEAVIER. They lay waste to all who stand in their path.”