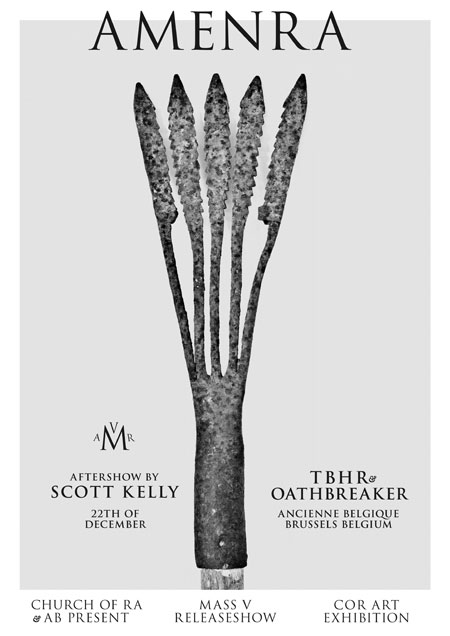 Anticipation is really starting to build as plans come together for the release of Mass V, the titanic new album from AMENRA which will see the light of day on Neurot Recordings in UK/EU on 26 November. Today we can reveal plans of upcoming live performances including one spectacular release show in their home country Belgium.

Here are the new and recently announced shows for AMENRA this year and next:

AMENRA‘s activity for 2012 will culminate in an umissable record release show on 22 December at AB in Brussels. Supporting them will be Church Of Ra bands, Oathbreaker and TBHR, with a very special after show by Scott Kelly. Edwin Pouncey will be speaking about subterranean metal and there will be a very special Church of Ra Art Exhibition including monumental art, video, photography and more… this is not your average release show! Fans will be able to purchase a limited exclusive version of the album with coloured CD and limited art which will only be available at this show and through their own webstore.

For this, AMENRA have unveiled this tantalising teaser for the release show including unheard sounds from the new album:

Finally, on 28th September AMENRA will release their first live CD on Consouling Sounds which can be pre-ordered HERE. Their own webstore address is www.soulslayer.net.

Still to come from AMENRA, full details of the new album Mass V and much more exclusive audio and visual footage, so stay tuned.