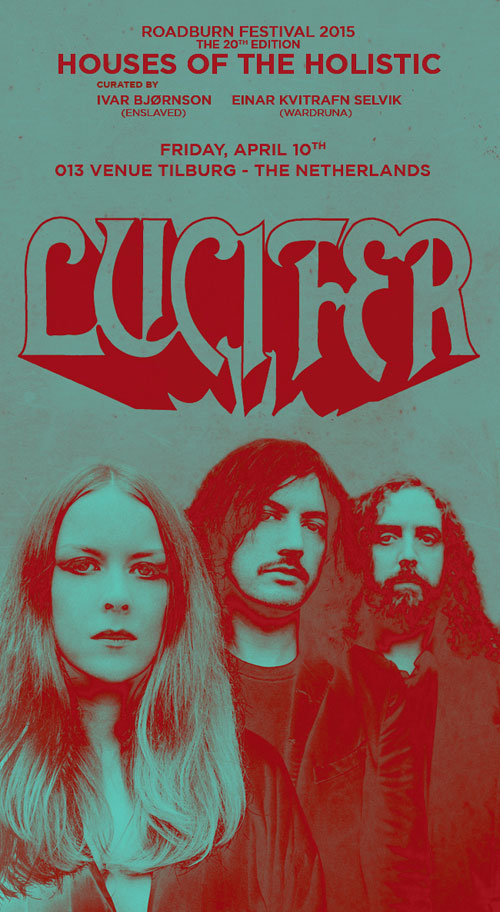 Walter & co are excited to announce the timely and welcome return of Johanna Sadonis, as she brings her newest manifestation, Lucifer, to Houses Of The Holistic. She will touch the darkest recesses of our souls at Ivar Bjørnson‘s and Einar “Kvitrafn” Selvik‘s curated Roadburn event on Friday, April 10 at the 013 venue in Tilburg, The Netherlands

“Everything goes in ever-increasing circles; music is not an exclusion”, says Ivar Bjørnson. “Lucifer deals with a sound that is close to the origins of our genre(s), drawing from the early days of Heavy Metal, Hard Rock and pre-doom. They’re a new and very promising act that has managed to add their own twist to a well-known formula. There’s exploration and progression, but a thriving scene also needs to preserve its roots and keep a living record of its past (look where the world is at after it forgot its roots!). The past is alive!”

In the words of Dom Lawson of Metal Hammer: “Although still firmly rooted in the fertile soil first cultivated by Black Sabbath, Deep Purple, Led Zeppelin and Blue Oyster Cult, Lucifer exist in a proudly liberated and limitless sonic realm, where the heaviest blues rock is a mere starting point for the band’s skyward creative trajectory. Lucifer’s instinctive take on the very soul of early heavy metal is the electrified essence of rock’n’roll at its nascent purest. This is Magic Rock – heavy, heartfelt and holistic.”

Luficer will release their debut 7”, Anubis, via Rise Above Records on February 23rd.