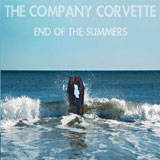 Ever since stoner rock bands started climbing out of the primordial Sabbath slime in the mid 90’s there have been a lot of bands following in the footsteps of Kyuss, Fu Manchu, Monster Magnet…etc, an AWFUL lot. And there have been a lot of awful bands rehashing the same riffs and lyrical themes with yawn inducing regularity. It’s pretty refreshing then, to come across a band who do sit firmly within the stoner genre yet offer up a twist of their own devising, so say hello to The Company Corvette.

Musically TCC sit at the Fu Manchu end of the scale with big fuzzy, Sabbath infused bluesy riffs but where most bands sound a little contrived these guys genuinely sound as if they don’t give a flying fuck what people think, they sound as if they’re just getting together and jamming their ideas for their own amusement and above all, sweet Jesus they sound really fucking stoned!!!

The opening title track sits on a lazy, laid back groove with a half assed riff and a THC ridden vocal line that barely registers. If this sounds negative, it isn’t!!! If you want true stoner rock then this is it, shining like a diamond in the giant turd that stoner rock has become. Imagine what Beck had in mind when he wrote slacker anthem “Loser” and apply that to a heavy rock framework. Songs like “Blame It All On Me” follow a structure but sound as though they’ve grown organically from a hazy jam into towering behemoths of dirty riffs and drawling vocals.

“Henry”, interestingly considering the title, and I don’t know if this is a coincidence, reeks of mid 80’s Black Flag when that band had slowed their once charging visceral rock to a crawling punk baiting grind. As such it does stand out amongst the other tracks, largely due to its off beat snaking vocal melody. Here The Company Corvette succeed in taking a style of music usually associated with a freewheeling good time lifestyle and twisting it into something slightly demented and sinister. In fact, throughout this eight track album bassist Ross Pritchett’s droll, unenthusiastic drawl is the thing that really sets TCC apart and lifts this album above the ordinary. In sounding like he doesn’t give a fuck about the singing he has created a unique persona that makes Fu Manchu’s Scott Hill sound like Ronnie Dio!!!

“Regular Skip” does increase the pace but retains the loose slacker vibe of the slower songs. Generally, although the band plays together there is an overall looseness in the playing that does evoke the spirit of the Stooges and betrays a punk influence that runs through the stoner grooves and therein lies the band’s charm. Sure it’s great to hear a band playing tight and busting out their chops but it’s some much more interesting to hear a band doing whatever the fuck they want with a degree of attitude…just listen to the lyrics to “Wet Shoes” for example. It sounds like the guy is making them up on the spot and that in itself is part of the appeal of TCC. That said guitarist Alexei Korolev is no slouch when it comes to laying down a tasty lead but technique is never employed at the expense of the song or, more importantly, the vibe. Similarly drummer Peter Hurd lays down an unfussy, meat and potatoes groove that is big on simple thuggery and light on paradiddles and trickery….and sometimes you want something you can just zone out and nod your head to.

It would be a stretch of the imagination to say that this is a ground breaking, classic album in the making but it is a decent, highly enjoyable slice of lazy, hazy stoner rock that out smokes a good portion of its opposition. Definitely worthy of further investigation if you like your riffs fuzzy and your beats grooving…Dream Theater fans should avoid at all costs, but then it could be argued that Dream Theater fans should avoid any other human contact!!!