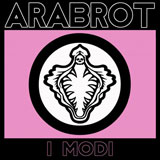 If I had a single cap as impressive as any amongst the vast array adorning Kjetil Nernes’ hat stand (so far I’ve seen him rock a wide-brimmed vueltiao, a casual fedora and even what appeared to be a horned foxskin) I would most graciously doff it towards Norway’s favourite son of garbage-dump noise-rock. To say it’s been a challenging year for the Årabrot mastermind would be the understatement of the century. Heavy touring in the first part of the year, culminating in an absolutely devastating performance at Camden’s DesertFest in late April, came at a shocking cost as Nernes checked into hospital diagnosed with throat cancer. One tumour’s rear triumphantly kicked, thirty five gruesome stitches up his neck and a with whole new band of musicians once again on board, Årabrot are back to thrust and convulse their enticing musical wares harder than ever before towards our eager ears.

I Modi translates from the Latin of The Ways, the title of a classical volume of erotica also known as The Sixteen Pleasures, engraved during the Italian Renaissance period. Banned and destroyed by the Catholic Church, it really was the Karma Sutra of its day; depicting intimate, yet highly explicit, acts of love-making between the likes of Jupiter and Juno and Antony and Cleopatra engrossed in everything from a quick missionary to the acrobatics of the leapfrog and the wheelbarrow. One listen to Årabrot’s 12-inch (every pun intended) ode to this phallic collection and you’re immediately straddled into an orgy of darkness, extremity and irresistible voyeurism from its foreplay to its aching climax.

Despite featuring the musical talents of members of Haust, Okkultokrati, concept.virus’ Stian Skagan and Swedish electronica princess Karin Park, this follow-up to last year’s mini album Murder Is Art is very much dominated by Nernes’ creative brilliance. Opener The Grip Of The Family, A Cinch is the closest we get to a “metal” track with its dogged, churning bassline and powerhouse percussion, topped off by Nerne’s eerie whispers and cries. The lyrics quickly transcend from the intrigue of “The mouthpart pout, an outward quest” to the out-and-out brutalism of “Let the holy nectars down the pisshole, Open the sick mouth”. Deliciously rich in sonic textures, this arrangement is truly hypnotic in its construction of powerful torrents of caustic pressure and bulbous torment.

It’s not until the swaying grime of Fillip The Pudenda, Tongue The Womb that you really experience Nernes opening his ravaged throat and roaring harder than ever before. This track harkens back more musically towards the Neanderthal caveman-doom of the Solar Anus record, with Nernes’ cackling aluminium guitar twangs and blunt-force riffage. The title, which basically could be rewritten colloquially as “flick the bean, lick her out”, is as modest lyrically as Nernes bellows out the likes of “The devine column of the menses to the left, And the volcanic phallic pillar to the right” and “Open your mouth and show your teeth, lover”. Lovely stuff.

But enough of this birds and the bees subtlety, let’s get down to the “Menstrual breath to the masculine skies” of Protomartyr Thekla, a ballad-like approach with piano and NIN-style guitar dirges giving way to lethargic riffing and Nerne’s yearning grimaces of frustration and Satanism. But this is then practically soft compared to album highlight Annul – a gothic organ-lead piece, interspersed with fractured guitar chords, funereal atmospherics, delicate piano work and Nernes’ terrifying throat. Short, sharp pieces of near-medieval music are punctuated by the frontman’s “phallic wand commands”, “Feel the power of the staff” and “BAT! BASH! POUND!” in a circular, kaleidoscopic motion that’s as haunting as it is addictive.

Closing out with the electronic drone title-track I Modi and the menstrual instrumental The Isis Pool does nothing further towards settling your nerves. The former features moans and cries and alien-esque sampling atop a spirit similar to the morbid soundings of Necro Deathmort, whilst the latter features female purring and songcraft, rich amongst a field of accordions and synthesizers.

Nernes and his Norwegian Grammy-winning merry men and women have done it once again in explosive style. I Modi is a deeply sexual encounter which is as seductive as it is intimidating and like some kind of bizarrely audial Peeping Tom, I couldn’t help but let them spray me again and again with their magical ecstasy. Don’t listen to this with your parents, or on a first date, or most likely with any other sane person. Årabrot present The Ways their way: stripped bare of the niceties, pleasantries and kisses and cuddles to the primitive essentials of the human body. Go in hard or go home.