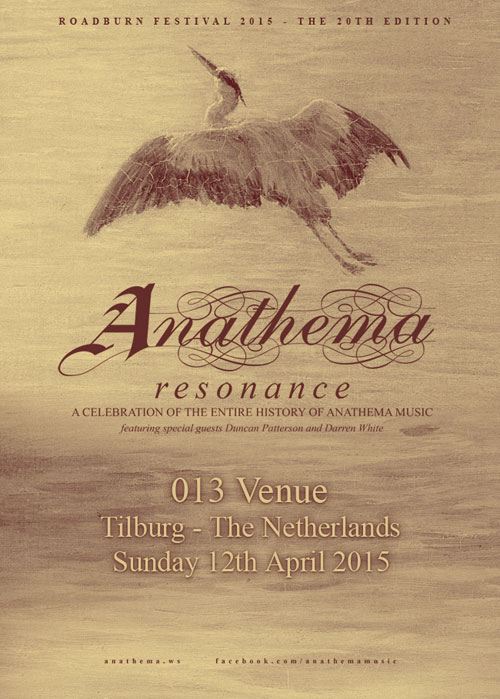 It is Walter & Co’s honour to announce that Anathema will headline the Sunday date of the 20th edition of Roadburn Festival, at the 013 venue on April 12, 2015 in Tilburg, The Netherlands, with a special performance that will span the innovative British band’s 25-year career, and include special guest appearances by former bassist and songwriter Duncan Patterson and original singer Darren White. The Roadburn show will be one of just a few dates that will make up Anathema’s short 2015 ‘Resonance’ tour

Anathema have steadily built a loyal following worldwide, and their career trajectory is unlike that of any other band in the last quarter century, and will be reflected and celebrated in reverse chronological order at Roadburn 2015. Starting with the anthemic progressive rock of their recent work (2012’s classic Weather Systems and 2010’s We’re Here Because We’re Here), the performance will gradually move back in time through the more gothic-oriented material of 1998’s Alternative 4 and 1996’s Eternity, all the way back to the pioneering work of 1995’s The Silent Enigma and the 1993 debut Serenades, with White and Patterson joining the band onstage for an historic reunion.

“Roadburn festival [is] a hugely respected institution and has to be the most fitting launch for the Anathema ‘Resonance’ tour, [It will be] a celebration of the band’s entire history, and to be joined by our old friends and comrades Duncan Patterson and Darren White for these exclusive shows will be a very special, potent and positive event for all of us. We hope you can join in this once in a lifetime celebration” — Danny Cavanagh.

This will be one of Roadburn 2015’s absolute highlights, and they can’t express how happy they are that the band has chosen Roadburn for such a once in a lifetime performance. Anathema‘s early albums – the lineups with Darren White and Duncan Patterson – as well as the  Judgement album have been a huge influence on many bands that have played Roadburn over the years, and they they are a blueprint for the festival itself as well. They’ve been in love with this band since the beginning, and their headlining performance on Sunday is Roadburn’s own tribute to Anathema, a unique opportunity for fans to see the band perform with two crucial early members.