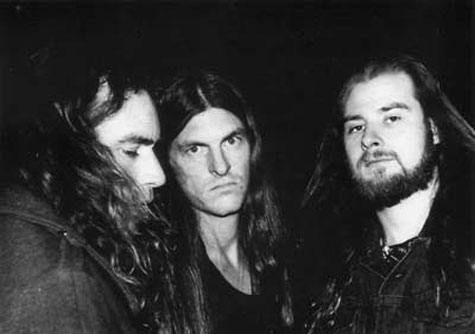 Here we are! The first headliner confirmed for both Desertfest London & Berlin is… the cult band SPIRIT CARAVAN, finally back after 12 years !!!

When The Obsessed folded in 1995 Scott “Wino” Weinrich moved from California to his native Maryland to create the band Shine. After a demo entitled “Powershine” and a 7″ EP “Lost Sun Dance” release during 1997 Shine became SPIRIT CARAVAN as he was joined by bass player Dave Sherman and drummer Gary Isom.

A 7″ single shared with Sixty Watt Shaman in 1999 was their first release together and several others followed : their first full-length album “Jug Fulla Sun” in 1999, a second EP intitled “Dreamwheel” later the same year, and after an extensive U.S. and European tour, their sophomore effort, “Elusive Truth” in 2001.

While SPIRIT CARAVAN‘s sound isn’t drastically different from the aforementioned The Obsessed, who welded the foot-stomping organic qualities of Grand Funk Railroad with no-frills American roots punk like The Dictators, all the while observing Black Sabbath, SPIRIT CARAVAN injected a healthy dose of cryptic psychedelia to their mix. Scott “Wino” Weinrich‘s guitar tone evinces the slow burning wisdom derived from many decades of hard living and touring in the underground music community.

The band received a lot of praise from the doom/stoner community but, unfortunately, SPIRIT CARAVAN split-up in May 2002… But as he showed many times in the past, Wino is like a phoenix ! And now it’s time for SPIRIT CARAVAN to be reborn !!

While DesertFest Berlin 2014 takes place over 24th-26th April 2014 at the famous Astra Kulturhaus in Friedrichshain/Kreuzberg, bands so far confirmed include Black Rainbows, SardoniS, Causa Sui, Elder, Gozu, Huata, Prisma Circus with more to be announced over the coming weeks and info on tickets can be found HERE.