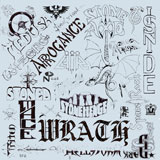 There’s nothing like a good compilation to soothe and satisfy the ADHD in us all. Not since Earache’s classic Grindcrusher comp (and speaking of archaeological digs, try to find this release without selling a kidney to pay for the last copy on eBay) have there been a better collection of obscure gems at my fingertips. Now, don’t let me lead you astray…the sixteen bands assembled for the Warfaring Strangers: Darkscorch Canticles compilation have absolutely nothing in common with the motley cast of grindcore characters that beat the shit out of my world back in 1990. No, this is a different beast altogether. Whether it’s Stonehenge, Stone Axe, or Stoned Mace (to name a few), each of these sixteen warriors have come to show all the modern day 60’s/70’s Sabbath revivalists how the real rockin’ went down back in the day. And as if this collection of kick-ass ditties wasn’t enough, a Dungeons and Dragons inspired companion board game (yes, that’s right, board game) Cities of Darkscorch is being co-released as a thematic centerpiece. Players get to choose any of the sixteen bands as their own personal RPG brainchild, to lead a DIY hard rock crusade, tour van and all, coast to coast, to bang every head in the American underground. Let me introduce you to the roster…

Air takes the helm as the opening act with ‘Twelve O’Clock Satanial’, a dreamy excursion into true 60s psychedelic territory, trading most of the guitars for keyboards and channelling a Beatles-esque ambience…but there’s an underlying evil that saturates, as if Air prayed to the same demonic muse that now fuels acts such as Uncle Acid…but the disturbing thing here is the deceptive “safety” of the sound, as if your friendly next door neighbour was the same one to drive a knife through your heart. Wrath‘s ‘Warlord’ keeps the mood consistent while taking a more aggressive, straight forward approach to the hard rock blueprint. The tracks flow seamlessly as Stonehenge‘s ‘King Of The Golden Hall’ hops and grooves with an opening “hey!” wailed through the speakers to kick start the mayhem. This track only grazes the scope of Stonehenge‘s sound, and if you can get your hands on the rare 7 inch single ‘Inferno’, you’ll see that it’s arguably one of the best examples of good to honest blues/psych rock of the time.

Triton Warrior‘s ‘Sealed In A Grave’ provides a nice mid tempo rocking transition into the 1-2 punch of Junction‘s ‘Sorcerer’ and Stone Axe‘s ‘Slave Of Fear’. In ‘Sorcerer’, the vocalist (Tom Koffler) and axe riffing mastermind Darryl St. John plead that we “stay away from the Sorcerer” and his powers to “hyp-mo-tize”…I’ll be honest, this song rocks too fucking hard to stay away. The occult inspired lyrics (c/o Jimmy Page’s influence by way of Aleister Crowley) and undeniable charisma of Junction‘s front men make this song an immediate classic in my eyes. ‘Slave Of Fear’ has a similar impact with its Robert Plantian vocal delivery that draws the listener into one hell of a doom laden chorus. Not one to rest, Stone Axe take it one step further as the song transforms into a head nodding blues groove machine. Be careful, the solo work here will light your ass on fire.

Wizard‘s ‘Séance’ leads the next round of tracks as a driving main riff contrasts quiet interludes of an almost whispered vocal…chants of “bring on the seance, be enlightened…” are repeated during the chorus, begging the listener to follow suit. A seductive track indeed. Stoned Mace‘s ‘Tasmania’ and ‘Black Death’ by Arrogance continue this theme of seduction and remind us that crooning is a lost art. Keeping the momentum, the smooth grooves of Sonaura‘s ‘Song Of Sauron’ warm the stage for Dark Star‘s ‘Spectre’, a track I’m sure producer Chris Goss would have loved to get his hands into (after hijacking the time machine)…with it’s fuzzed out hooks and pop appeal, Homme’s ‘Queens’ (of the Stone Age) must be direct descendants of this throne. Inside‘s ‘Wizzard King’ closes out the round as a warped, oscillating feedback cloud coats a nice, repeating riff…they ask, “Don’t you wanna be a Wizzard King?“…I think we all know the answer to that one.

The final campaign is led by Space Rock‘s ‘Dark Days’, a straight up blues number, fit for anyone’s last day on earth. The vibe of the track is bittersweet, as in a person’s desired end to suffering (death) always leaves another behind to mourn. Medusa‘s ‘Black Wizard’ livens the mood with a full-on psych rock assault. Imagine the love child between modern Portland, Oregon riff rockers Danava and ‘In The Flat Field’ era Bauhaus…yeah, that twisted. Gorgon Medusa‘s ‘Sweet Child’ and Hellstorm‘s ‘Cry For The Newborn’ complete the disc in true progressive fashion, with a blues/synth sound that would fit nicely anywhere in Pink Floyd’s catalogue.

In a world where so many are trying to imitate and recreate a certain “retro sound,” it feels pretty damn good to hear the real deal. Props to The Numero Group for doing the research and putting together such a fine collection of songs. As most of these bands have come and gone into obscurity, it’s our duty to stop and pay homage. So there it is. Pick your warrior, pick your weapon.