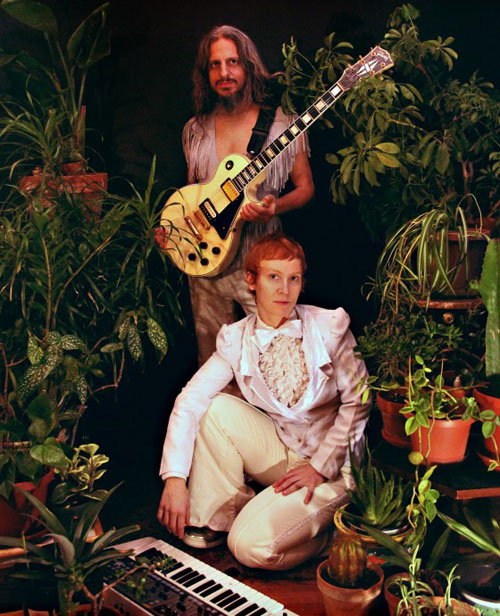 Baltimore-based duo, DARSOMBRA, is about to embark on the most extensive tour excursion in the band’s history, beginning tonight, February 28th in Richmond, Virginia.

Taking their unclassifiable brew of ambient/avant-born noise/drone/psyche rock and synchronized visual performance out to more new audiences than ever before, DARSOMBRA is confirmed to infiltrate sixty cities across the entire country over the next two months. As always, the layered riffs of bassist/guitarist/vocalist Brian Daniloski (ex-Meatjack, Trephine) will be transformed and looped over themselves in an ever-morphing flow of pedal effects and processors, building each song into epic, multi-layered soundscapes. Daniloski’s ill wall of sound be paired with cohort Ann Everton’s synchronized visual display, the artist’s organically-influenced backdrops and psychedelic patterns being broadcast directly onto the duo as they perform together, with Everton also supplying syths and vocals to the actual audio delivery of each performance more than ever on this tour.

After releasing a plethora of albums and EPs through At A Loss Recordings, Public Guilt, Underradar and others, DARSOMBRA signed with Exile On Mainstream for the release of their Climax Community LP (review here) in mid-2012. The album traverses forty-five minutes of the outfit’s low-building, transcendental soundscapes, where searing guitar riffs, leads, loops, and samples, combine to form elements of metal, psychedelic rock, experimental/drone, prog and krautrock. Yet, Climax Community is also where the act transformed from a solo act to a duo and began incorporating immersive visual displays to their auditory experimentation, with mini-films created to accompany the music both on record and during live performances. DARSOMBRA is writing the follow-up LP to Climax Community as well as material for additional releases being slated for later in the year following the massive tour.